Witness: De Lima has no link to drug trading in Bilibid | Inquirer News

Witness: De Lima has no link to drug trading in Bilibid 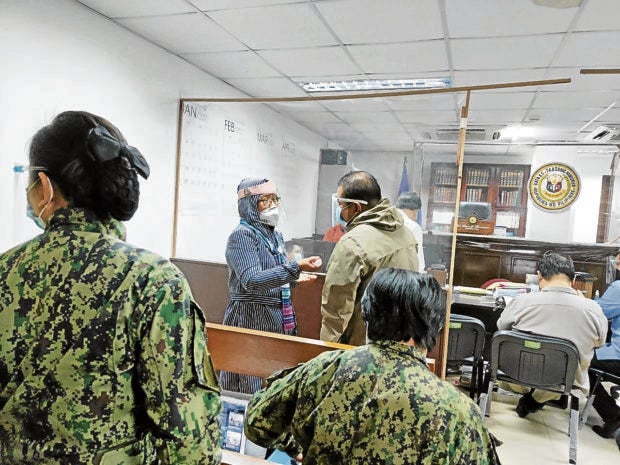 RARE APPEARANCE For the first time since the start of the pandemic last year, detained Sen. Leila de Lima (second from left) attends a hearing in person on Tuesday at Branch 205 of the Muntinlupa City Regional Trial Court, which is trying one of the criminal cases accusing her of involvement in the illegal drug trade, charges she has dismissed as mere political vendetta for her criticism of the Duterte administration. —PHOTO FROM THE OFFICE OF SEN. LEILA DE LIMA

MANILA, Philippines — Another prosecution witness has claimed no personal knowledge of the alleged involvement of detained opposition Sen. Leila de Lima in drug trading inside New Bilibid Prison in Muntinlupa.

De Lima attended on Tuesday the continuation of the hearing at Muntinlupa City Regional Trial Court Branch 256, which is trying one of the three conspiracy to commit drug trading cases against her.

This was the first time the senator was allowed to go out of the custodial center of the Philippine National Police in Camp Crame, Quezon City, for almost a year since the imposition of pandemic restrictions. Previous hearings were held by teleconferencing.

Feb. 24 will mark the fourth year of De Lima’s detention due to what she said were “trumped-up” charges brought against her for being one of the staunchest critics of President Duterte.

During the cross-examination, Bilibid-convict-turned prosecution-witness Noel Martinez said he had no involvement and personal knowledge on the drug transactions mentioned in the charge.

“He also clarified that he had never made any transaction with the accused—from Sen. de Lima; her former aides Ronnie Dayan and Joenel Sanchez; former Bureau of Corrections chief Jesus Bucayu and his staff Wilfredo Elli; and police asset Jad Dera—they had no personal transaction, especially with drugs,” said Rolly Peoro, De Lima’s lawyer.

Peoro said all those who were involved in the drug transactions were already dead. Cebu drug lord Jeffrey “Jaguar” Diaz was killed in a shootout with policemen who were serving a warrant of arrest in his home in Las Piñas on June 17, 2016, while De Lima’s coaccused, convict Jaybee Sebastian, died of COVID-19 complications on July 18, 2020.

“It was Martinez himself who told the court that he had no personal drug transactions, only referrals as these were transactions made outside Bilibid and he had no involvement with these. For us, his statements would weaken the claim of the prosecution,” Peoro said.