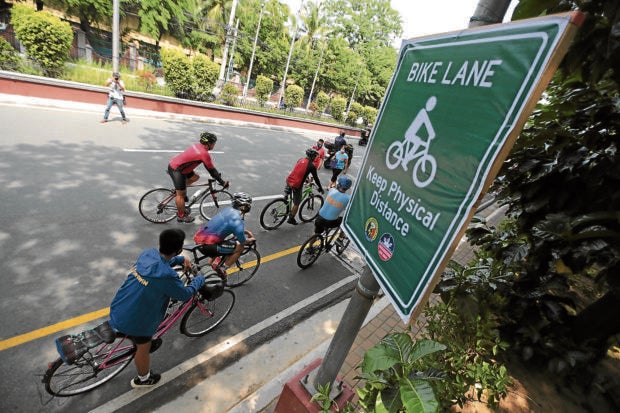 MANILA, Philippines — A broad coalition of cycling advocates again sounded the alarm over the government’s lack of urgency in building a protected bike lane network in Metro Manila, stressing that the national capital was lagging behind Metro Cebu and Metro Davao, both of which have significantly less funds for the project.

At a press briefing on Monday, Jedd Ugay, spokesperson for Move As One Coalition, explained that the only progress seen in Metro Manila was 730 meters of pavement marking, which was way below the needed 306 kilometers of protected bike lanes.

“We have to veer away from car-centric thinking. If we let this time pass, we may no longer have the opportunity to build bike lanes in the future,” Ugay said.

A total of P1.3 billion was allocated for the construction of protected bike lanes in the country under the Bayanihan to Recover as One Act, the bulk of which—P814 million—was set aside for 338 kilometers in Metro Manila.

Metro Davao was given P150 million for 44 km, while Metro Cebu was provided the same amount for 140 km.

As of Feb. 1, around 20 percent of the project was already completed in Metro Cebu while it will be starting soon in Metro Davao.

“Basically, the government agencies may not be committed enough [to the project] to actually push for it [in Metro Manila]. We have already asked them the reason behind this, but we still do not know their exact reasons,” Ugay said.

Robert Siy, urban planner and transport expert at Move As One Coalition, said it would make more sense to convert one car lane into a bike lane.

Earlier, the Department of Transportation said around 29 km of bike lanes had been built and that it aimed to build 140 km in 2021.

But on Tuesday, an alliance of 27 active transport groups said since the law was passed on Sept. 11, the public had yet to see a single kilometer of what was supposed to be a 306 km protected bike lane network in Metro Manila.