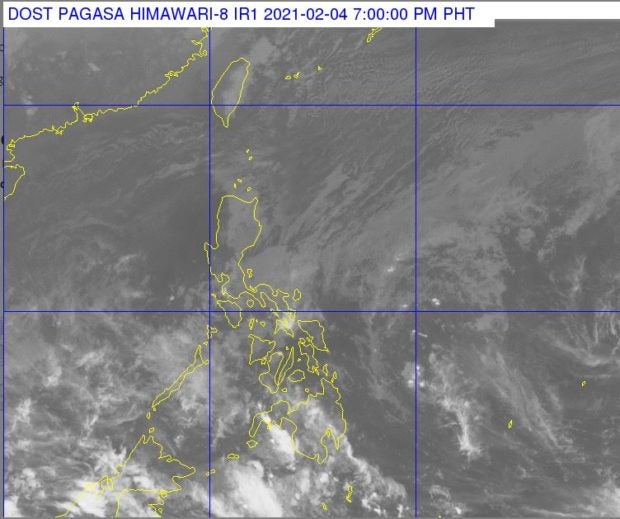 MANILA, Philippines — The northeast monsoon slightly weakened but the tail end of a frontal system may still affect the country, bringing cloudy skies and rains over the eastern side according to state meteorologists.

Weather reports from the Philippine Atmospheric, Geophysical and Astronomical Services Administration (Pagasa) on Thursday afternoon showed that the northeast monsoon or amihan now only affects the northern and central parts of Luzon.

However, the frontal system or the shear line between the cold amihan and the warm easterlies brings cloud bands in the eastern parts of the country, especially in Bicol Region, Quezon province, Marinduque, Romblon, Mindoro provinces, and Eastern Visayas.

For the rest of Visayas and Mindanao, weather conditions would be fair except for isolated rain showers and thunderstorms.

A gale warning remains raised over the eastern seaboards of Cagayan Valley, down to Aurora, Quezon province, Bicol Region, and northern waters of Eastern Visayas.  The seaboards of Ilocos Norte are also under the gale warning, but it was lifted for the extreme northern Luzon area.

Read Next
Vaccine passports: path back to normality or problem in the making?
EDITORS' PICK
WHO says not to use ivermectin on COVID-19 patients
Harry Roque in hospital for COVID-19 treatment
Pru Life UK receives four golden arrows for solid corporate governance
PH’s COVID-19 active cases reach over 190k after 12k new infections reported
Pre-order the new vivo Y20s [G] to get a free TWS earphone
Speed up your game with the new vivo Y20s [G]
MOST READ
Stop ‘creeping occupation’ of ‘militia’ boats in WPS, Pacquiao asks China
Bea Alonzo clarifies status of her relationship with Dominic Roque
Convicted former aide of Sen. Bong Revilla dies — BuCor
Locsin to China: ‘Then move out’
Don't miss out on the latest news and information.