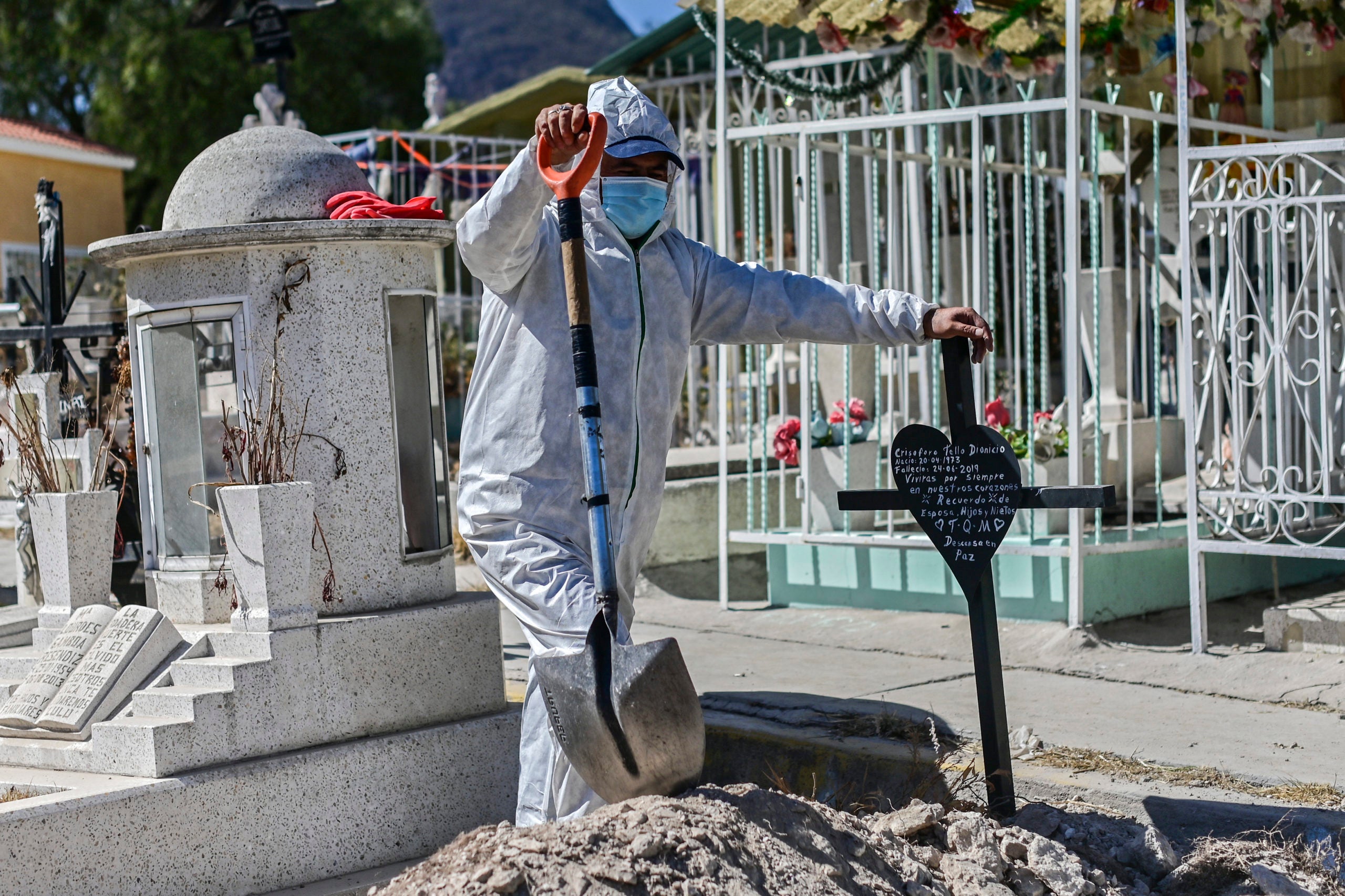 A gravedigger is seen at the tomb of a victim of Covid-19 at the Municipal Pantheon of Ecatepec, Mexico state, Mexico, on February 2, 2021. (Photo by PEDRO PARDO / AFP)

MEXICO CITY — When Miguel caught the coronavirus his family hoped help would come quickly for the Mexican grandfather, but instead they had to wait — for oxygen, a hospital bed and, finally, a cremation.

Their story is increasingly familiar as Mexico reels from its worst month of the pandemic yet, with more than 32,000 deaths in January, overwhelming hospitals, mortuaries, cemeteries and crematoriums.

After Miguel fell ill in late December, “the doctor asked us to go get oxygen, and that’s where the long journey began,” said his 32-year-old granddaughter, who asked not to identify her grandfather’s family name for reasons of privacy.

When the 78-year-old’s condition worsened his relatives struggled to find a hospital with room for him.

After he succumbed to the virus on January 4, Miguel’s family was put on a waiting list to cremate his remains.

“They told us that he was in the queue, because many people had already died,” his granddaughter said.

Finally Miguel was cremated on January 8.

Mexico has officially registered around 160,000 deaths from Covid-19 — the world’s third highest toll — and excess mortality data suggests the real number is much higher.

The country of 126 million has recorded 1.8 million known cases of the virus, including President Andres Manuel Lopez Obrador, who is said by his government to be making a good recovery.

There is now an average wait of eight days between death and cremation, said Roberto Garcia, commercial director at the Olimpia funeral home and vice president of Mexico’s funeral directors association.

Before the pandemic, the maximum wait was 24 hours, Garcia said.

Behind him, a blackboard listed the names of the deceased to be collected from hospitals the next day.

“There’s too much demand,” said Garcia.

Although many families want cremations, others prefer burials, but there is a queue for those too.

Demand for coffins “skyrocketed” in December during the Christmas holiday, said Pedro Jaramillo, manager of a factory that makes metal caskets.

“Our warehouses were full, but the moment that the pandemic exploded they began to empty, until it became an apocalyptic situation,” he said.

His company, located in a suburb next to Mexico City, manufactures about 70 coffins every day.

Even if he wanted to, Jaramillo cannot increase production overnight.

“It’s a specialized trade, it has to be done by hands that know the process. Saying ‘let’s double production’ is not possible.”

In the urban sprawl north of the capital, the Jardines del Recuerdo graveyard cannot keep up with requests from bereaved families, sales manager Margarita Beristain said.

“The demand for services due to Covid deaths increased enormously, so much so that we don’t have enough capacity and have to turn people away,” she said.

Grave diggers and crematorium workers have been hard at work trying to reduce the backlog.

But the main problem is that the refrigerated room where bodies are stored until cremation or burial can only hold 44 corpses.

“When we decline to provide a service it’s because we have nowhere to keep the body safe and we’re not going to deceive the families,” Beristain said.