‘Science would not lie:’ Lawyer of Dacera case respondent stands by PNP report 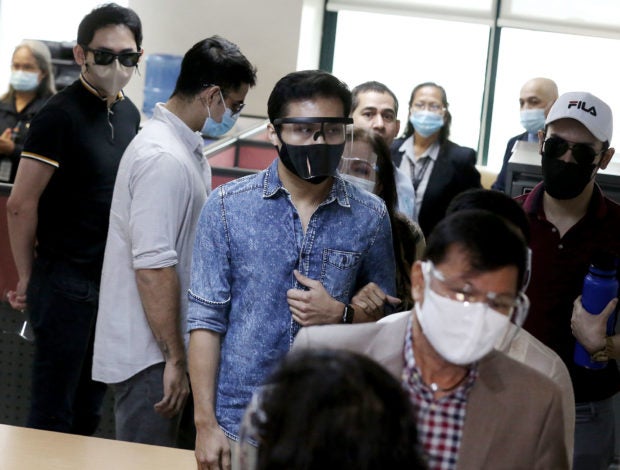 PRELIMINARY INVESTIGATION Seven of the 11 respondents in the police complaint of rape with homicide in connection with the death of flight attendant Christine Dacera on New Year’s Day
leave the Makati Prosecutor’s Office, which began its preliminary investigation recently. They include (from left) Rommel Galido, John Pascual de la Serna III, Gregorio Angelo de Guzman
and Valentine Rosales (far right). Also present were Dacera’s family and officers of the Philippine National Police, together with their lawyers. INQUIRER file photo / RICHARD A. REYES

MANILA, Philippines — The lawyer of one of the respondents in flight attendant Christine Dacera’s case stood by the results stated in the reports submitted by the Philippine National Police (PNP), which showed that Dacera died of natural causes.

“What we placed there were the findings of medicolegal because science would not lie. The two medicolegal reports speak of natural death. The DNA examination speaks the same that there is an aneurysm,” Lawyer Emmanuel Ramos, legal counsel of John Paul Halili, told reporters after the preliminary investigation on the Dacera case.

Ramos was asked about the contents of the counter-affidavit, responding to the complaint of the PNP against Halili and 10 others who were with Dacera on New Year’s Day.

Halili is one of the respondents who were arrested by Makati police, who filed the provisional charge of rape with homicide. He was released after the Makati prosecutor’s office referred the complaint to lawmen for further investigation.

City prosecutors said respondents submitted their counter-affidavits during the preliminary investigation on the Dacera case this Wednesday.

The continuation of a preliminary investigation for the complainant’s reply-affidavit is set on February 11, 2021, at 2 p.m., city prosecutors said in its statement.

In a histopathology exam conducted on Dacera’s organs, police found that she died of a ruptured aortic aneurysm, triggered by increased blood pressure.

A medicolegal report from the PNP Crime Laboratory also ruled out that there was foul play in Dacera’s death.

Despite PNP records contradicting the rape and homicide angle, Dacera’s family still insisted that the 23-year-old was sexually molested prior to her death on New Year’s Day.