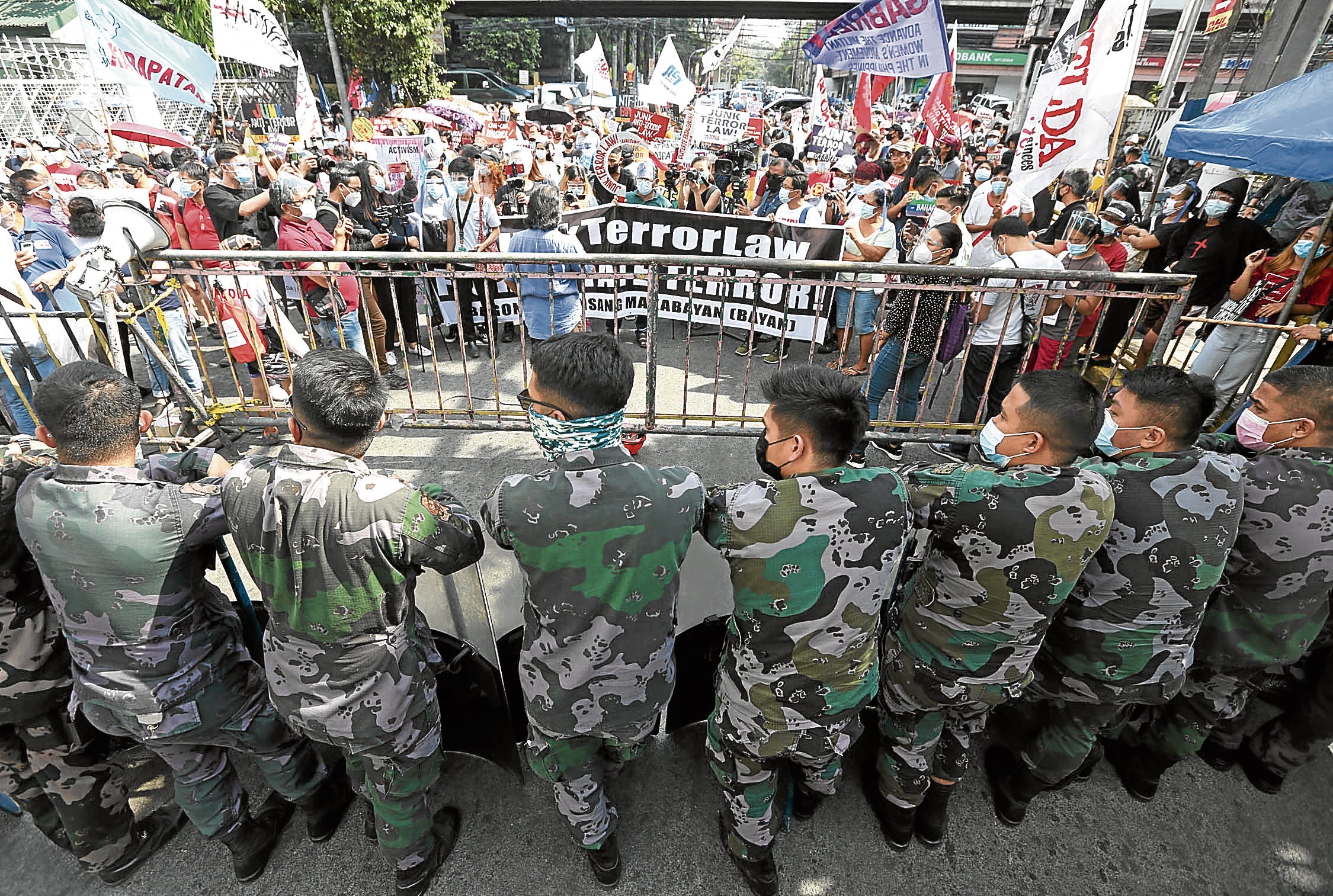 37 PETITIONS Militant groups gather in front of the Supreme Court in Manila on Tuesday as the tribunal begins hearing oral arguments against the Anti-Terrorism Act of 2020. —MARIANNE BERMUDEZ

MANILA, Philippines — Lawyers for groups and individuals opposing the Anti-Terrorism Act on Tuesday took turns assailing the measure, saying it was more repressive than the old antisubversion law.

They said the Supreme Court should declare the entire law or parts of it unconstitutional before someone was unjustly victimized by its implementation. But early into the first day of oral arguments on the 37 petitions against the law, Associate Justice Marvic Leonen asked the lawyers whether it wasn’t too early to challenge Republic Act No. 11479, or the Anti-Terrorism Act of 2020, which was signed by President Duterte in July 2020.

The lawyers argued that the antiterror law, which the government claimed was solely intended against terrorists, was the worst edict that Congress had passed since the 1987 Constitution was ratified a year after democracy was restored in the country.

Alfredo Molo III, a constitutional law professor from the University of the Philippines who represented a group that included former Supreme Court Associate Justices Antonio Carpio and Conchita Carpio Morales, said the law was more dangerous than the Cold War-era Anti-Subversion Act. That law was abused by dictator Ferdinand Marcos to quell political dissent and was repealed in 1992, Molo said.

“Since 1987, there has been no law that has breached so many constitutional rights and … threatened to diminish the judiciary by directly taking away its powers and giving it to the executive,” he said.

Molo said the terrorism law allowed authorities to detain for up to 24 days without warrant individuals for alleged membership in an organization arbitrarily designated as a terror group by the Anti-Terrorism Council (ATC). He pointed out that under the old law against subversion, authorities were required to prove that a person “knowingly and intentionally” joined the Communist Party of the Philippines (CPP) and other similar underground organizations, and had committed “overt acts.”

“These are not present under Section 10 of the antiterrorism law,” Molo said in response to a question from Associate Justice Rosmari Carandang. He warned about the dangers of the ambiguity and “overbreadth” of the law that restricted the exercise of free speech.

Molo said Section 25, which allowed the ATC to declare groups and individuals as terrorists, may actually be used to designate Carpio and Morales as terrorists for “stoking conflict with China” for merely speaking out against Chinese intrusion in Philippine waters in the disputed South China Sea.

Leonen asked Molo whether the court should “wait for an actual case.” “Maybe the Aetas is the actual case,” Leonen said, referring to the two Aeta men who were arrested in August last year and the first to be charged with terrorism under the law after the military claimed they were New People’s Army rebels.

Leonen said the court had already ruled in the past that “there must be a clear actual case” before it could intervene. “Yes we have fears of any law, yes we have fears of any government. It’s understandable. But to ask the Supreme Court to move in and use its powers, without that standard, would invite us to insert our political perspective into how a law should be,” he said.

“Isn’t it the role of the judiciary to give a chance to the political department to be able to address the harm they wish to address before we come out immediately on a theoretical point, to annul that provision?” Leonen said.

“Should we not wait until there is a clear case perhaps there can be a petition filed on those that are Red-tagged, and perhaps the facts should be very clear, goes to a regional trial court first so that the regional trial court can weigh in?” he added. Molo responded, saying: “My humble submission is that deference, judicial restraint, ends where the Bill of Rights begins.”

Human rights defender Jose Manuel “Chel” Diokno said the late Manila Archbishop Jaime Cardinal Sin, who called on the people to protect soldiers who broke away from Marcos at the start of the 1986 Edsa People Power Revolution, would have been arrested for inciting terrorism if this law were existing then.

As the revolt brought Metro Manila to a standstill, disrupted essential public services and “had a debilitating impact on national defense, security and public safety,” Diokno said Sin would have been indicted for “seriously destabilizing the country’s fundamental political structure and creating a public emergency.”

“The antiterrorism act is novel in many ways. But what makes it stand out is the fact that it is the only law in our country that includes the exercise of fundamental rights in its definition of a crime,” he added. Diokno said the law required that protests, advocacies, labor strikes and other similar activities, should not be intended to “cause death or serious physical harm, to endanger a person’s life or create a serious risk to public safety.”

“No other law makes the exercise of constitutional rights a crime when actuated by a certain intent. No other law empowers the state to arrest its people for exercising rights guaranteed by the Constitution, based solely on a law enforcer’s subjective opinion of their state of mind,” he said.

Carandang questioned the legal standing of the petitioners, asking whether any of them had been charged or prosecuted under the law.

In response, former Solicitor General Jose Anselmo Cadiz cited threats from Lt. Gen. Antonio Parlade against the petitioners, which were brought to the attention of the court by Carpio and Morales last week. Parlade is the chief of the military’s Southern Luzon Command and spokesperson for the National Task Force to End Local Communist Armed Conflict.

He had warned the petitioners on his Facebook page that the “Day of Judgment is upon you and the Filipino people, who have suffered enough from the malignant hands of the (CPP), of which you are a part of, sit in judgment.”

Cadiz said Parlade made “an actual threat.” “We cannot sit idly by while Parlade actualized this threat,” he said. Cadiz said the law was “constitutionally infirm” as it would only do “more harm to our civil liberties than providing security against the evils it seeks to curtail.”

“The petitioners have legal standing to file the petitions as the instant case concerns our Bill of Rights, which are public rights,” he said.

“Some of the petitioners have even been characterized by state elements as aiding terrorists. There is, thus, a credible threat of prosecution against said petitioners,” he continued. Lawyer Evalyn Ursua cited the case of the Rural Missionaries of the Philippines (RMP), a church-based group whose assets were frozen by the Anti-Money Laundering Council (AMLC) on suspicion that it was financing the activities of the communist rebels.

She said RMP wasn’t informed of the action, depriving the group of its right to defend itself and disprove the allegations against it.

Violation of separation of powers

Albay Rep. Edcel Lagman argued that the law “violates the separation of powers” principle in the Constitution when it transferred judicial authority to the executive branch by empowering the ATC, a seven-member body composed of Cabinet secretaries, to order the arrest of suspected terrorists.

Former Bayan Muna Rep. Neri Colmenares, who represented the National Union of People’s Lawyers, said an innocent act may be declared as a form of terrorism if the ATC “imputes vaguely-defined terrorist intentions and purposes on the suspect.”

“Clearly, the mere imputation of intentions and purposes by the respondents suddenly goes into past conduct and transforms acts considered legal and constitutional when done into punishable terrorist acts,” Colmenares said.

“This hydra-headed legal monster must be slain now lest it devours further anybody and everybody, including even its own defenders in Congress now that the terror law is no longer suspended during elections,” he said.

“We must do the right things for the right reasons in the right way.” The oral arguments will continue next Tuesday.