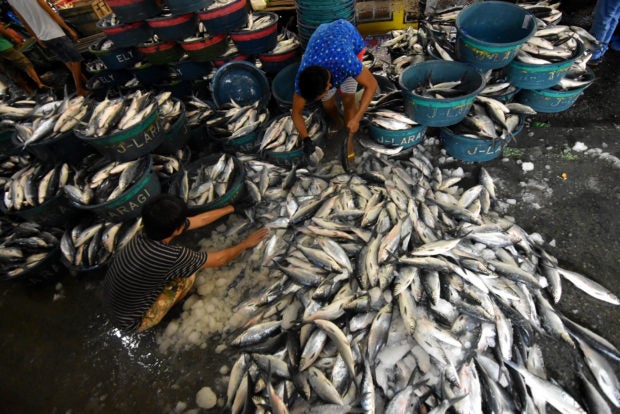 DAGUPAN’S BEST Tubs of newly harvested “bangus” (milkfish) are sorted out at the fish market in Dagupan City. Bangus grown in this Pangasinan city’s ponds are among the best varieties in the country. INQUIRER/Willie Lomibao

MANILA, Philippines — An agriculture and food safety advocacy group has urged consumers to go for fish like bangus (milkfish) and tilapia now that prices of meat and poultry products continue to increase.

Tugon Kabuhayan said fish from aquaculture remains the most affordable food for Filipinos as it is also the best alternative source of protein.

“Per capita, Filipinos consume about 60 kilos of meat protein per year. Sixty percent of that, or roughly 36 kilos, comes from fish, according to government data. Hence, fish–like bangus and tilapia–can be a real ‘life saver’ especially for low-income families,” the group said in a statement Thursday.

Citing information from the Department of Agriculture, it said that pork has peaked at P400 per kilo this January while aquaculture commodities bangus and tilapia can be bought at P170 and P120 per kilo, respectively.

It also said that prices of these aquaculture commodities are far lower than local and imported round scad or galunggong, which range from P200 to P260 a kilo.

Tugon Kabuhayan said it is confident that the aquaculture sector has sufficient supply of bangus and tilapia for consumers. The group likewise predicted that prices of fish will further decrease in the following months based on the previous years’ trend wherein prices of one kilo of galunggong and bangus went down by as much as P50 to P60.

Data shared by fish producers from Taal and Pampanga show that tilapia farm gate price is likewise starting to exhibit a downward trend, according to the group.

“This trend may lead to lower retail prices now at P120 down to P110 per kilo by mid-February to early March. Price of tilapia is expected to further dip starting April. Furthermore, prices of all fish are expected to decrease as more fish become available as the closed season of round scad will end on January 31,” it added.

The group then reiterated its call for the government to further facilitate the growth of aquaculture by allowing sustainable use of lakes, dams, and reservoirs for aquaculture production.

“The past years have shown stable growth in the production of aquaculture commodities, especially tilapia. We strongly urge the public to buy more affordable and locally produced bangus and tilapia. Patronizing these commodities will encourage production which will further stabilize supply and fish prices,” Tugon Kabuhayan added.