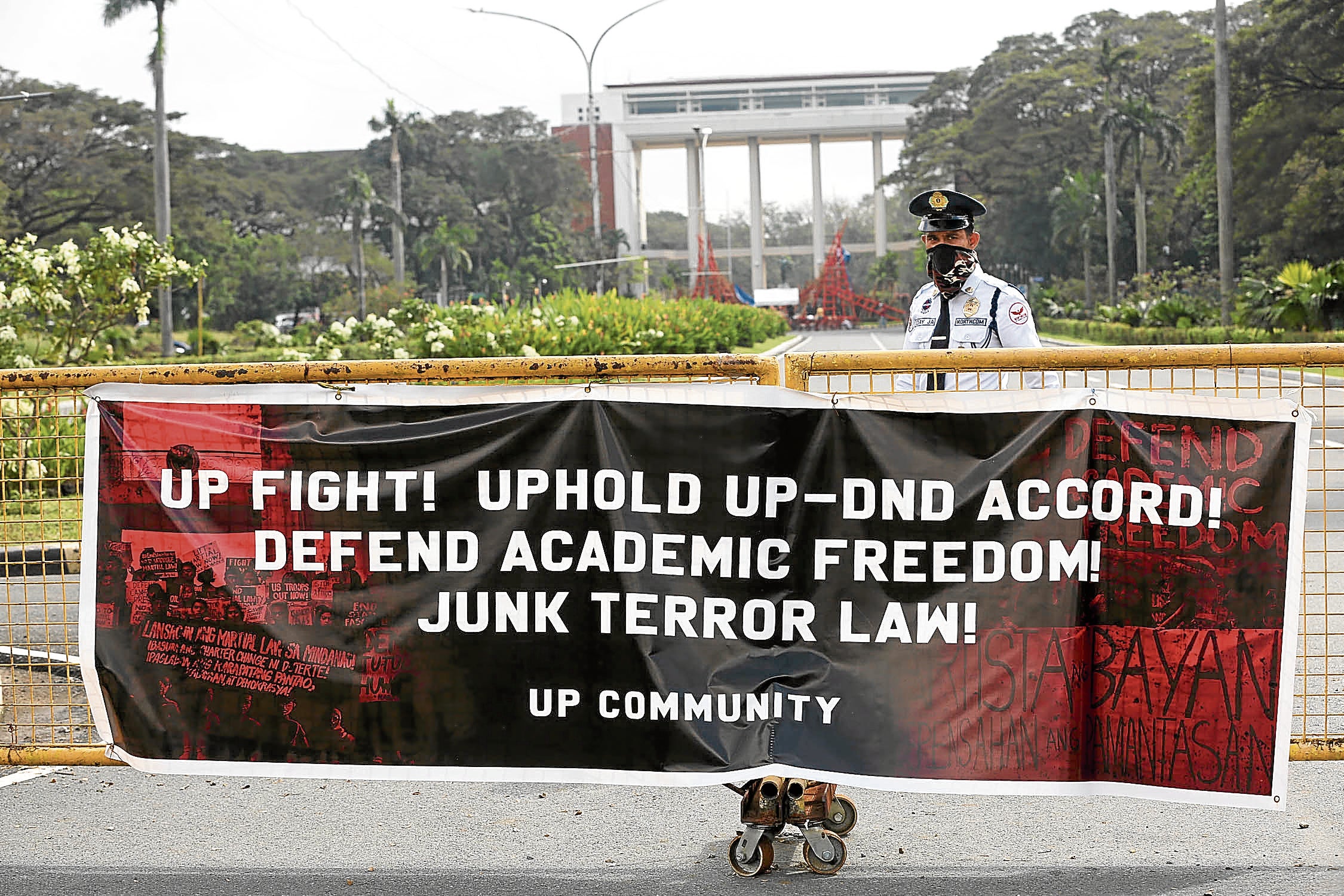 FIGHTING STANCE A tarpaulin displayed at the University of the Philippines in Diliman, Quezon City, sums up the position of the UP community regarding the Department of National Defense’s decision to terminate a 1989 agreement on noninterference of the military in the state university’s affairs. —NIÑO JESUS ORBETA

MANILA, Philippines — At least 34 professors emeriti of the University of the Philippines (UP) Diliman, have denounced the unilateral abrogation of the UP-Department of National Defense (DND) accord and the wave of red-tagging that the university has been receiving as of late.

According to a joint letter addressed to the Board of Regents chair and Commission on Higher Education Chair Prospero De Vera and UP president Danilo Concepcion, the professors find no sufficient reason why the UP-DND agreement should be scrapped.

The agreement signed back in 1989, bars military and police presence inside UP campuses without prior notice.  It was abrogated in a letter sent by Defense Secretary Delfin Lorenzana to Concepcion last January 15.

UP Professors Emeritii weigh in on academic freedom, honor and excellence. You know that expression, “If I have seen further, it is by standing on the shoulders of giants”? Well, here be them giants. #UPFight #DefendUP #AssertAcademicFreedom pic.twitter.com/oIx6cqcGT4

“We, the undersigned, Professor Emeriti of the University of the Philippines Diliman, wish to register our protest in the strongest terms against the recent unilateral abrogation by the Secretary of National Defense of the 1989 agreement between UP and DND,” the letter read.

“We find no tenable or compelling reason why this agreement, which largely served its intended purposes for over 30 years, should now be abrogated without at least the consultation owed to the parties that signed and implemented it in good faith,” the letter added.

“We find no compelling reason why this agreement, which largely served its intended purpose for over 30 years, should now be abrogated without at least consultation owed to the parties that signed and implemented it in good faith,” the professors added.

The professors emeriti also said that no proof was presented on how the agreement failed and how the alleged communist recruitment happened inside the campus.  Also, they noted that no rules of engagement were provided which left people second-guessing what would happen next.

In Lorenzana’s letter, he mentioned allegations that students were being recruited into the Communist Party of the Philippines and the New People’s Army (CPP-NPA) as to why the agreement should be nullified.

“And instead of giving the University community a clear idea of what the military intends to do on campus in lieu of the agreement — the new rules of engagement, as it were — we are left to anticipate, with grave apprehension, the return of the kind of authoritarian policing that we suffered under martial law,” the professors explained.

The other professors emeriti who signed the letter were:

READ: DND exits deal requiring prior notice for counterinsurgency operations in UP campuses

READ: #DefendUP trends after DND scraps agreement with UP

Recently, De Vera offered to broker talks and link UP with the administration so that stakeholders from the university and the Department of National Defense can sit down and talk the issue over.

READ: CHEd steps into UP-DND row over ‘problematic’ accord, to broker talks