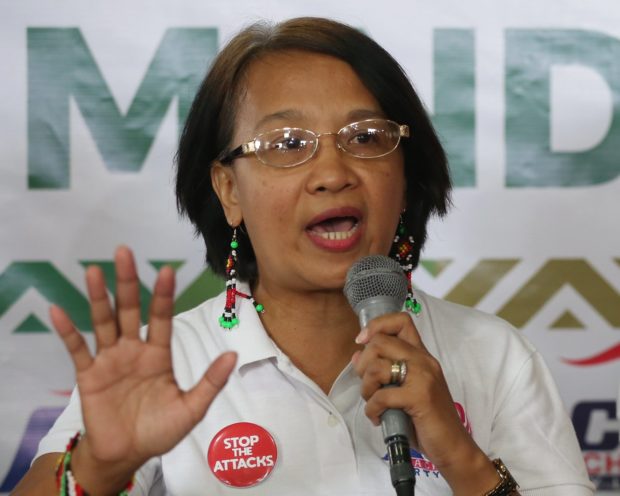 MANILA, Philippines — “By saying that the UP-DND accord is ‘destined to be problematic,’ the Commission on Higher Education [CHEd] is already colluding with the narrative and objective of state security forces.”

ACT Teachers Rep. France Castro had this to say Monday after CHEd Chairman Prospero De Vera said that the agreement barring unauthorized police and military presence at the University of the Philippines was “destined to be problematic.”

Castro said De Vera should protect the academic freedom of academic institutions and not collude with the “baseless accusations” of the security forces.

“The Chairman of the Commission on Higher Education himself is attacking the essence of education institutions by not condemning state security forces in terminating the UP-DND accord and further red-tagging most higher education institutions with their baseless and recycled lies of being so-called breeding grounds of NPAs,” Castro said in a statement.

“What is problematic with the historical accord fought for academic freedom by students and activists?” the lawmaker added.

Castro added that instead of protecting academic freedom, De Vera CHEd “is allowing these tyrannical attacks of the Duterte administration to limit the discourse in higher education institutions, red-tag students, teachers and legal organizations of education stakeholders.”

“CHEd will set a dangerous precedent by not condemning and not defending the academic institutions it is supposed to protect from tyrannical attacks,” Castro said.

“For someone who has benefitted from the academic freedom in UP, CHEd chair De Vera should know the importance of academic freedom and it should be protected from an administration’s tyrannical attacks,” she added.

Castro pointed out that under the Constitution, an academic institution has the right to choose who may teach, what may be taught, how it should be taught and who may study in their institution.

“By accepting the narrative of the AFP and PNP against UP, PUP, and even universities like Ateneo, La Salle, FEU and UST, the obvious bias of the CHEd is with the security sector and not education stakeholders,” Castro said.

De Vera was a professor for public administration at the University of the Philippines (UP), and also served as a member and later on Chairman of the UP Board of Regents before he was tapped to join CHEd by President Rodrigo Duterte.

Weighing in on the unilateral abrogation of the agreement between UP and the Department of National Defense (DND), De Vera said this was bound to happen because of the vagueness of the terms of the accord.

INQUIRER.net has sought the comment of De Vera but has yet to receive a reply as of posting time.