Over the past few days, Bernie Sanders has gone places, all thanks to a picture of him turned into a meme. Now, charities in the American senator’s state of Vermont are benefiting from the viral photo.

Sanders captured the internet’s imagination when he was photographed huddled up in the cold during the presidential inauguration of Joe Biden on Wednesday, Jan. 20 (Jan. 21 in Manila). During the historic event, Sanders looked unassuming in a parka, now-famous mittens from a schoolteacher and a face mask.

As the photo circulated online, Sanders’ team released a sweatshirt with the meme as a design on Thursday. It was sold out the next day. 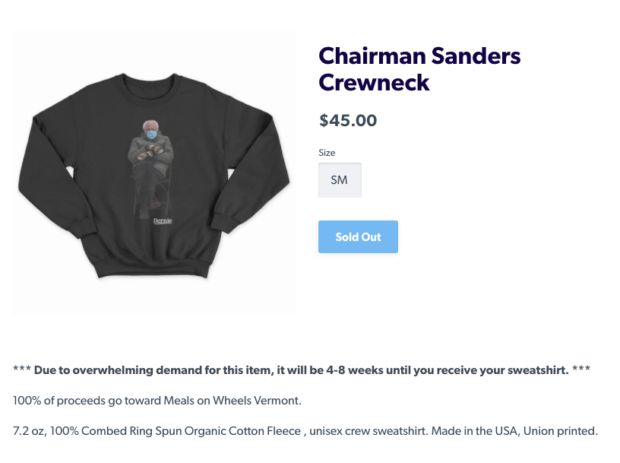 Proceeds of the sweatshirt, which costs $45 (P2,100), will benefit Meals on Wheels Vermont, which feeds people with disabilities or chronic conditions under 60.

For those who want in on a Bernie fix, his campaign store still has the meme on black shirts which are available for $27 (around P1,300). All proceeds go to Vermont charities.

Sanders became an inauguration star for appearing undisturbed by the momentous occasion, which marked an end to Donald Trump’s controversial presidency. However, the Vermont senator told talk show host Seth Meyers on Friday, Jan. 22, that he actually felt emotional during the event: “I was in tears seeing the new president getting sworn in and the old president leaving Washington.” JB