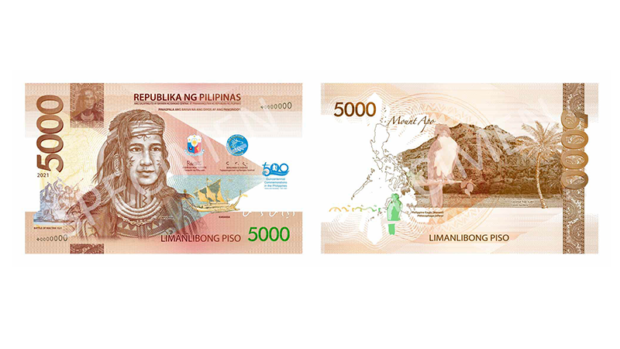 UPGRADE The image of Lapu-Lapu, the face of the Battle of Mactan where Portuguese explorer Ferdinand Magellan was killed, is featured on a P5,000 commemorative bill more than 40 years after its appearance on a one-centavo coin (below) circulated in the 1980s. —PHOTOS COURTESY OF BANGKO SENTRAL NG PILIPINAS

From being the face of the smallest Philippine currency unit in circulation, the small one-centavo coin, the local chieftain who is said to have defeated Portuguese explorer Ferdinand Magellan and his invading forces in Cebu 500 years ago will now be represented on one of the largest currency denominations ever issued by monetary authorities.

On Monday, the Bangko Sentral ng Pilipinas (BSP), in cooperation with the National Quincentennial Committee (NQC), launched the P5,000 Lapu-Lapu commemorative banknote and medal to kick off the 99-day countdown to the 500th anniversary of the “Victory at Mactan.”

The Lapu-Lapu banknote will be the second highest currency denomination ever issued by the central bank after the limited edition P100,000 bill made for the Philippines centennial year in 1998.

In rites held at the Fort San Antonio Abad in the BSP Complex in Manila, BSP officer in charge Francisco Dakila Jr. and Senior Assistant Governor Dahlia Luna presented the banknote and medal to Executive Secretary Salvador Medialdea, who received the items on behalf of President Duterte.

“The BSP and NQC have collaborated on this commemorative banknote and medal to celebrate the heroism of Lapu-Lapu and his warriors, and to familiarize the present generation with the country’s rich precolonial history,” Dakila said.

The celebration of the 500th anniversary of Lapu-Lapu’s victory and the special part the Philippines played in the globe’s circumnavigation are collectively referred to as the 2021 quincentennial commemorations in the Philippines.

On its obverse, the banknote depicts a young Lapu-Lapu, an image of the battle of Mactan, the QCP logo, and a “karakoa,” the large outrigger warships used by native Filipinos.

The reverse shows the Philippine eagle, or the Manaol, which symbolizes clear vision, freedom and strength, and which embodies the ancient Visayan belief that all living creatures originated from an eagle.

Also featured are the tree of a coconut, which was food the people of Samar provided to Magellan and his crew, and Mount Apo in Mindanao, where the Spanish expedition finally found directional clues to its planned destination of Maluku or the Spice Island.

The medal on the obverse features the marking “Lapulapu” above an image of the Lapu-Lapu Shrine in Cebu, and the logos of the QCP and the BSP.
Its reverse shows the marking “Battle of Mactan,” a rendition of the battle, and the date “27 April 1521.”