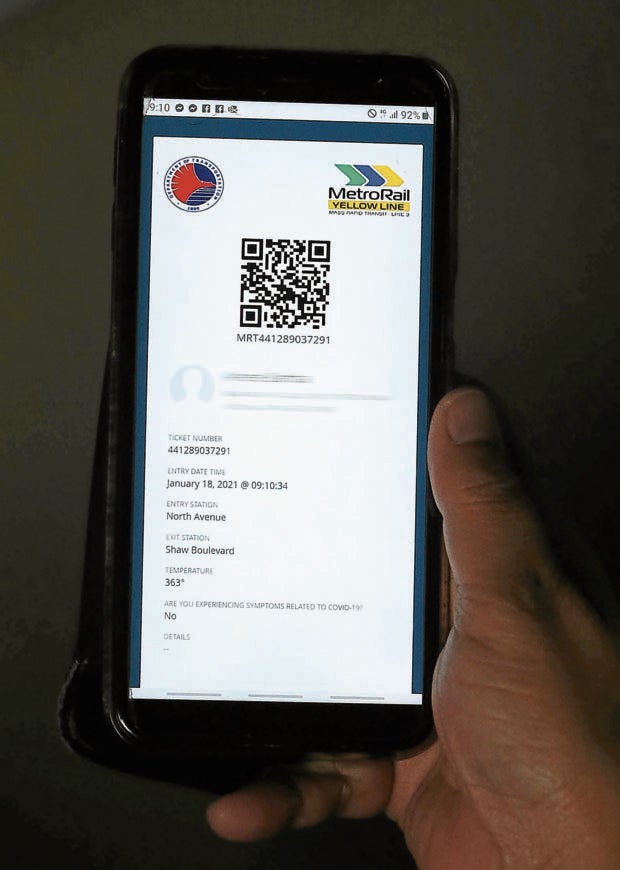 GOING DIGITAL Passengers scan QR codes on their phones during the launch of a contact tracing app for MRT 3 users. —NIÑO JESUS ORBETA

MANILA, Philippines — Technical glitches, long lines and connectivity problems hampered the soft launch of a new contract tracing app of the Department of Transportation (DOTr) as commuters at the Metro Rail Transit Line 3 (MRT 3) rushed to work on Monday.

Trish, a sales officer who regularly took the commuter train, said she preferred the pen-and-paper contact tracing forms that were handed out to passengers before entering the station since this took a much shorter time compared with the MRT 3 Trace app.

The DOTr launched the new contact tracing system for commuters to scan a quick response (QR) code upon entering MRT stations, which would redirect them to the department’s website.

Upon access to trace.dotrmrt3.gov.ph, commuters will be asked to register and fill out a contact tracing form. A QR code will then be generated for scanning at the entrance.

But commuters like Trish found the procedure impeded by the long waiting time.

“I tried to enter the MRT 3 North Avenue station, but when I saw the long line, I thought that maybe the QR code [system] failed. So I didn’t bother to line up and just opted to take a taxi since I was already running late for work,” she said in an online chat with the Inquirer.

The taxi ride to her office in Kamuning, Quezon City, took her only 20 minutes, while the time for her to wait in line and take the train would take about 45 minutes, she said.

Some commuters also pointed out the inconvenience of using the app since they could not access the DOTr website despite having stable internet connection. Others did not have enough pay load on their mobiles.

One said it “did not make any sense” to use the app since there were still long lines at the station.

For Trish, mobile data “is an extra expense for those who earn little.”

“Some of us no longer buy load for our mobile phones because we already have Wi-Fi at home, and it really is just additional expense,” she said.

“This only shows that a lot of our passengers do not want to use the manual contact tracing form and start using the digitized process,” Capati said.

“This is one of the reasons why we had a soft launching so that we may assess what aspects of the web application need to be fixed.”

The app will be fully implemented by February.

Despite MRT 3 Trace’s hiccups, Emvin, who also regularly takes the MRT 3 to get to work on Shaw Boulevard, said he still preferred a digitized contact tracing system rather than manually filling out forms.

At North Avenue station around 8:30 a.m. on Monday, Emvin recalled that only one instruction board was posted for all commuters, causing them to stand close together since it took around 20 minutes before the DOTr’s website finally functioned.

It also took him about an hour to arrive at his workplace rather than his usual 15-minute trip.

While Emvin agreed that the digitized system would minimize physical contact with other commuters, he suggested a unified contact tracing app for all government facilities.

“If they can find a way to make the online app load faster, then it would have been fine. A unified app that could be used in the entire country would be better since using multiple apps could cause low-tech smart phones to malfunction,” he said.

Trish said, “If they’re after … convenience for the commuters, there are many other… ways to do it [with less glitch].”