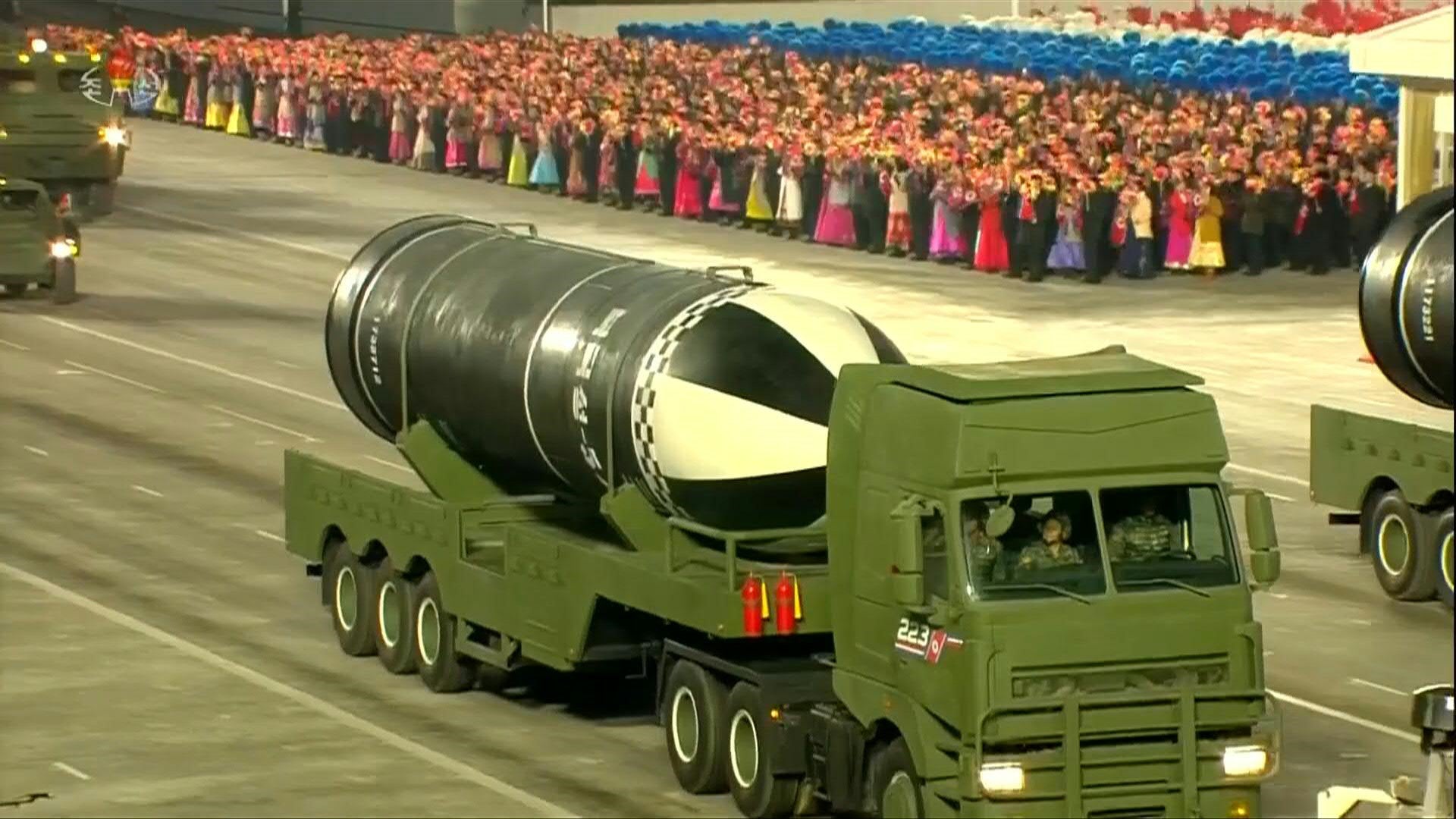 Nuclear-armed North Korea unveiled a new submarine-launched ballistic missile at a military parade in Pyongyang on Thursday evening, in a show of strength days before Joe Biden’s inauguration as US president. The display came after the five-yearly congress of the ruling Workers’ Party, where leader Kim Jong Un decried the US as his country’s “foremost principal enemy.”/AFP

The display came after the five-yearly congress of the ruling Workers’ Party, where leader Kim Jong Un decried the U.S. as his country’s “foremost principal enemy”.

The troops’ breath condensed in the cold winter air and none of the thousands of participants were seen wearing masks.

“The world’s most powerful weapon, submarine-launch ballistic missile, entered the square one after another, powerfully demonstrating the might of the revolutionary armed forces,” the official KCNA news agency said.

Four of the SLBMs with black-and-white cones were driven past, footage on state television showed, and Park Won-gon of Handong Global University in the South described them as “the North’s ultimate nuclear weapon”.

The North has shown off earlier, smaller SLBMs before, and broadcast footage of a test launch, but it was not clear whether they were fired from a submarine or an underwater platform.

A working SLBM on a nuclear-powered submarine would be a strategic game changer, enabling Pyongyang to launch a surprise attack from close to the United States or carry out a strike even if its land-based forces had been destroyed.

At the congress, Kim said the North had completed plans for a nuclear submarine, but any such vessel is likely to be years away from going into service.

It is also never certain whether Pyongyang is displaying actual missiles or models at its set-piece events.

Analysts say the North is using the party meeting and military display to send the incoming administration in Washington a finely calculated message of strength in an attempt to extract concessions.

KCNA said the parade included rockets with a “powerful striking capability for thoroughly annihilating enemies in a preemptive way outside the territory” — implying a range extending beyond the Korean peninsula.

Pyongyang did not display any of its intercontinental ballistic missiles (ICBMs), unlike at its previous parade in October, when it revealed a huge new ICBM on an 11-axle vehicle that analysts said was the largest road-mobile, liquid-fueled missile in the world.

Kim and Donald Trump had a tumultuous relationship, engaging in mutual insults and threats of war before an extraordinary diplomatic bromance.

But little substantive progress was made, with the process deadlocked after a February 2019 summit in Hanoi broke down over sanctions relief and what Pyongyang would be willing to give up in return.

The North is under multiple sets of international sanctions over its banned nuclear weapons and ballistic missile programs, which have made rapid progress under Kim and which it says it needs to defend itself against a possible US invasion.

At the same time, it is under a self-imposed coronavirus blockade, having closed its borders last January to protect against the virus that first emerged in neighboring China, adding to the pressure on its moribund economy.

And the change of US leadership presents a challenge for Pyongyang. Washington is expected to return to more orthodox diplomatic approaches under Biden, such as insisting on extensive progress at working-level talks before any leaders’ summit can be considered.

The parade was evidence that the North had continued to improve its technology, said Soo Kim of the RAND Corporation, while at the same time “it knew not to display an ICBM considering there will be a new US presidential administration installed next week”.

“It’s a careful calibration and one that signals more testing, more development, and more displays of missile delivery systems once the Biden administration comes into office,” she told AFP.