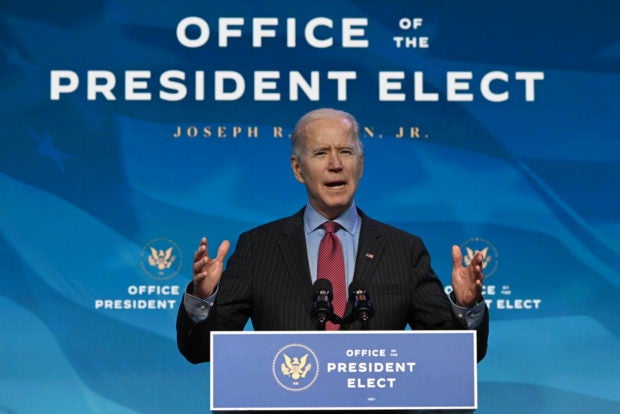 In this file photo taken on January 08, 2021 US President-elect Joe Biden speaks at The Queen theater in Wilmington, Delaware to announce key nominees for his economic and jobs team. Biden will on January 14, 2021 present a $1.9 trillion package to revitalize the US economy as it faces an onslaught of coronavirus cases, senior officials in his transition team said. The massive spending plan will raise stimulus checks provided under an earlier measure passed last month to $2,000, and also call for increasing the federal minimum wage to $15 an hour. (Photo by JIM WATSON / AFP)

WASHINGTON – President-elect Joe Biden will propose injecting $1.9 trillion into the US economy when he takes office next week, as evidence mounts that the recovery from the sharp downturn caused by Covid-19 is flagging.

With his fellow Democrats narrowly controlling both houses of Congress, Biden has a shot at passing what would be the third massive pandemic aid package.

Dubbed the American Rescue Plan, the proposal includes a host of measures aimed at revitalizing the world’s largest economy, senior officials in his incoming administration said on Thursday.

“We are in a race against time, and absent additional government assistance, the economic and public health crises could worsen in the months ahead; schools will not be able to safely reopen; and vaccinations will remain far too slow,” a campaign document warned.

“We will get right to work to turn President-elect Biden’s vision into legislation that will pass both chambers and be signed into law,” they said in a joint statement.

But this is just the first step, and the officials said Biden intends to present a second “recovery” plan to lawmakers soon after his inauguration on Wednesday to spur hiring and fight climate change.

The government on Thursday reported a spike in new jobless claim filings in the first week of 2021 to nearly a million, its highest level since August, while official data last week showed the economy shed jobs in December.

Biden will take office after a tumultuous transition that saw violent a violent mob invade the US Capitol, egged on by President Donald Trump, as lawmakers were meeting to certify the Democrat’s election victory.

His stimulus proposal builds on two massive relief packages Congress approved in 2020, and both increase and extend through September unemployment benefits that have helped tens of millions of people pay their bills after losing their jobs during the pandemic.

Biden’s plan however also includes $350 billion in funding to state and local governments, which Republican lawmakers blocked throughout last year.

Also potentially challenging is the president-elect’s move to increase the size of stimulus checks Americans received in the December package to $2,000, which would fulfill a campaign promise.

But with only the slimmest of majorities in Congress — including an evenly split Senate where Vice President-elect Kamala Harris could have a tie-breaking vote — Democrats will have to woo some Republicans if anyone in their party breaks ranks.

One Democratic senator has already expressed hesitation over increasing the payments, but earlier this week Republican Senator Marco Rubio told Biden he would back the additional aid.

The proposal also calls for $160 billion to fight Covid-19 including through a national vaccination campaign, and $170 billion for schools, with the goal of getting most institutions serving kindergarten through eighth grade open in the first 100 days of his administration.

Prior to the release of the specifics, Michael Feroli of JP Morgan predicted Congress could pare Biden’s plan down to the $900 billion range, matching the measure approved last month.

Even the smaller amount would boost GDP growth this year to 5.3 percent and in 2022 to 2.6 percent, he said, a “remarkable expected turnaround” aided also by negligible inflation and the Federal Reserve’s maintenance of low borrowing rates.

It also includes flexible credits and grants for small businesses that are major employers and have struggled to survive after states tightened business restrictions to stop Covid-19 from spreading.