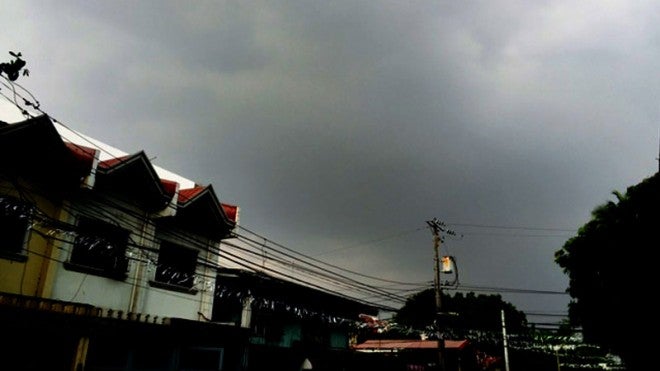 MANILA, Philippines — The tail-end of a frontal system and the northeast monsoon will bring scattered rains to Luzon on Friday, according to the Philippine Atmospheric, Geophysical and Astronomical Services Administration (Pagasa).

Pagasa reported in its 4 a.m. bulletin that cloudy skies with scattered rain showers and thunderstorms may prevail in the Bicol region and Quezon due to the tail-end of a frontal system, or the boundary where the northeast monsoon and the easterlies converge.

The tail-end of a frontal system has been affecting the weather in some parts of the country in the past few days, but Pagasa weather specialist Shelly Ignacio said its effects are starting to dwindle.

(There is still a tail-end of a frontal system but its effects are starting to weaken. Nevertheless, it is still affecting the weather in the eastern section of Southern Luzon.)

Meanwhile, the northeast monsoon will bring cloudy skies with light rains to Cagayan Valley and Cordillera Administrative Region, according to Pagasa’s forecast.

Metro Manila and the rest of Luzon will have partly cloudy to cloudy skies with isolated light rains also due to the northeast monsoon.

Visayas and Mindanao, on the other hand, will have partly cloudy to cloudy skies with isolated rain showers due to localized thunderstorms.