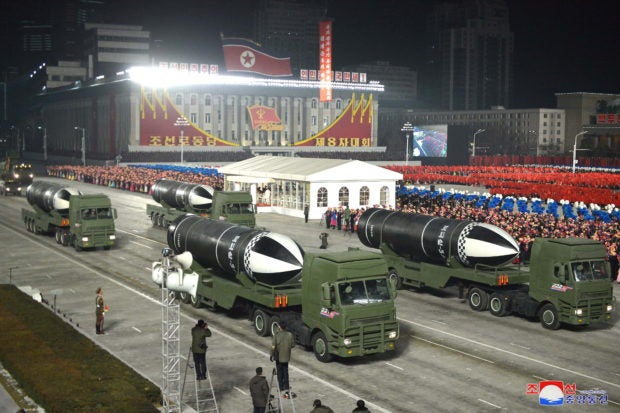 Military equipments are seen during a military parade to commemorate the 8th Congress of the Workers’ Party in Pyongyang, North Korea January 14, 2021 in this photo supplied by North Korea’s Central News Agency (KCNA). KCNA via REUTERS

SEOUL – North Korea displayed what appeared to be a new submarine-launched ballistic missile (SLBM) at a parade on Thursday night, state media reported, capping more than a week of political meetings with a show of military might.

The parade featured rows of marching soldiers, as well as a range of military hardware including tanks and rocket launchers. 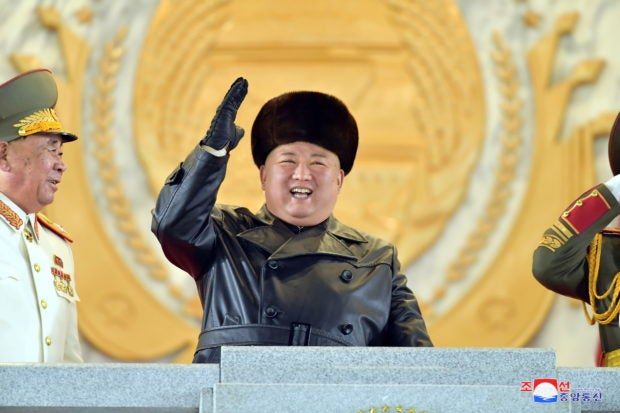 At the end, a number of what analysts said appeared to be new variants of short-range ballistic missiles and SLBMs rolled into the square on trucks.

“The world’s most powerful weapon, submarine-launch ballistic missiles, entered the square one after another, powerfully demonstrating the might of the revolutionary armed forces,” news agency KCNA reported.

North Korea has test-fired several SLBMs from underwater, and analysts say it is seeking to develop an operational submarine to carry the missiles.

Photos released by state media showed the SLBM was labelled Pukguksong-5, potentially marking an upgrade over the Pukguksong-4 that was unveiled at a larger military parade in October.

Unlike that October parade, Thursday’s event did not showcase North Korea’s largest intercontinental ballistic missiles (ICBMs), which are believed to be able to deliver a nuclear warhead to anywhere in the United States.

The parade in itself was not intended to be a provocation but was a worrying sign of Pyongyang’s priorities, said Leif-Eric Easley, a professor at Ewha University in Seoul.

“The economy is severely strained from pandemic border closures, policy mismanagement and international sanctions,” he said. “Despite or perhaps because of this, Kim Jong Un feels the need to devote scarce resources to another political-military display.”

On Wednesday, Kim Yo Jong, the sister of Kim Jong Un and a member of the ruling party’s Central Committee, criticised South Korea’s military for saying it had detected signs of a parade in Pyongyang on Sunday.

North Korean officials have been meeting in Pyongyang for the first party congress since 2016.

Read Next
Biden unveils $1.9 trillion economic plan as US recovery buckles
EDITORS' PICK
Nestlé Philippines’ ‘NESCAFÉ Plan’ bags Grand Anvil at PRSP 56th Anvil Awards
822 NPA-free barangays set to get P20-M gov’t aid — Esperon
Pope Francis to meet top cleric Sistani on second day in Iraq
Don’t waste the hope of vaccines, warns WHO
Every Filipino home can now be a smart home with realme TechLife
Smart reinforces superiority with best speed and mobile video experience in PH
MOST READ
So: I lacked connections to succeed in PH ‘culture’
Robredo on Sara Duterte leading poll surveys: Why are Filipinos drawn to leadership of this kind?
Gerald admits being with Julia, reveals breakup with Bea through ‘too many conversations’
US lays out list of aid to ‘satisfy’ Duterte following VFA payment demand
Don't miss out on the latest news and information.