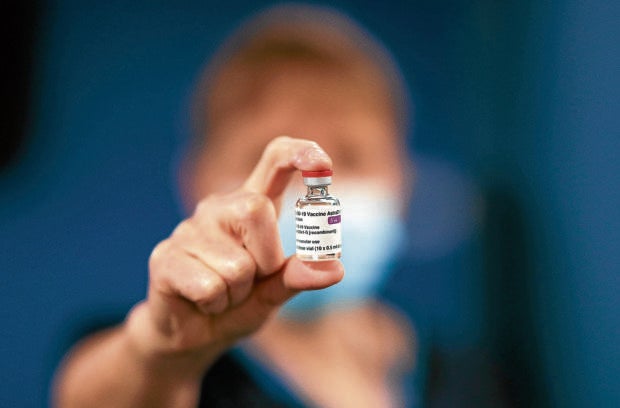 ENDING PANDEMIC Many local governments have signed agreements with the British pharmaceutical firm, AstraZeneca, to buy its COVID-19 vaccine through the national government, hoping that amass inoculation program will end the pandemic. Photo shows a health worker holding a vial of the vaccine produced by AstraZeneca and Oxford University at Pentland Medical Practice in Currie, Scotland. —REUTERS

The race to secure a share of the coronavirus vaccine seems to put smaller and poorer towns at a disadvantage.

Mayors in southern Luzon, whose municipalities occupy the lower rung in terms of population and internal revenue allotment, have yet to announce fund allocation for the vaccines. But four of them, in separate phone interviews, shared plans to pool resources by giving up infrastructure projects or realigning budgets from other programs.

A mayor of a fourth-class municipality (annual income: P3 million-P5 million) in Laguna said the local government might go as far as borrowing by securing a loan through the Department of Budget and Management.

“Our population is 20,000. If we go with AstraZeneca (vaccine), we’re told it’s about P500 for two doses. We can’t use up all our funds for health programs since we also have to take care of other [issues], like hypertension or diabetes,” the mayor said.The British pharmaceutical company AstraZeneca seems to be the preferred brand of local governments, especially in Metro Manila, which recently signed a purchase deal through a tripartite arrangement with the national government.

Another mayor in Laguna said local officials were “confused” by the policies on procurement laid out by the national government, prohibiting them to directly buy their vaccines from suppliers.

“There was one [local government] that was turned down [by a drug company] and was told that [purchases] should only be [made] government-to-government,” the local chief executive said.The Laguna mayors declined to be identified in this report, fearing that speaking out might bungle negotiations for a bulk order through a nonprofit organization.

Another mayor serving in an island town in southern Luzon said several officials were engaged in informal talks so they could “pool” their purchase.“We were worried that since our populations are too small and, therefore, the orders will also be [in] small [quantities], the drug companies might not entertain us,” the mayor said.Another concern is storing the vaccines in remote towns.

In a Jan. 6 briefing in Laguna, Secretary Carlito Galvez Jr., chief implementer of the National Task Force Against COVID-19 and the government’s vaccine czar, said a private cold storage facility was being considered in Sta. Rosa City to keep the vaccines arriving in the country.

“[I’m hoping], which I believe is also the sentiment of the other mayors, for clear guidelines on [vaccine] sharing,” said Mayor Vince Soriano of Pakil, a fifth-class municipality (annual income: P1 million-P3 million).

“For example, maybe the national government could shoulder the vaccination of 50 percent [of a town’s population], the provincial government 20 percent and the remaining 30 percent by the municipality or the city,” he said.

Soriano said smaller towns were “more than willing” to allocate part of their own funds to help the national government.

Read Next
Low pressure to bring rain to Visayas, Mindanao
EDITORS' PICK
New Year, New Rediscoveries
Acer Philippines welcomes you to its first flagship store
Is your company a growth champion? Stand up and be recognized!
4 senators want military, cops off UP campuses
PUP accord with DND also faces termination
Joe Biden sworn in as 46th U.S. president, urges end to ‘uncivil war’
MOST READ
A shade at Roque? Vice asserts being a comedian, not a clown
Trump’s parting gifts to Biden: Roaring stocks, a weaker dollar, tons of debt
Graft complaint filed vs Diokno, other BSP execs for P1.75-B contract for IDs
Biden says Trump wrote him ‘very generous letter’
Don't miss out on the latest news and information.