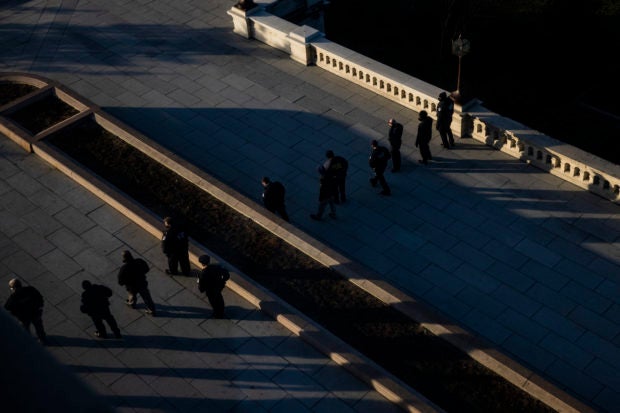 WASHINGTON, DC – JANUARY 07: Capitol Police officers sweep the grounds of the U.S. Capitol building on January 7, 2021 in Washington, DC. Following a rally yesterday with President Donald Trump on the National Mall, a pro-Trump mob stormed and broke into the U.S. Capitol building causing a Joint Session of Congress to delay the certification of President-elect Joe Biden’s victory over President Trump. Samuel Corum/Getty Images/AFP

WASHINGTON – Donald Trump condemns “in the strongest possible terms” violence by supporters who stormed the US Capitol after being whipped up in a speech by the president, his spokeswoman said Thursday.

“Let me be clear: The violence we saw yesterday at our nation’s Capitol was appalling, reprehensible and antithetical to the American way,” White House press secretary Kayleigh McEnany told reporters.

“We condemn it — the president and this administration — in the strongest possible terms.”

Calls for Trump’s removal have been building a day after his supporters stormed the seat of US government in Washington in a violent attempt to prevent the certification by Congress of Democrat Joe Biden’s election victory.