Biden condemns Trump as calls mount for his removal from office 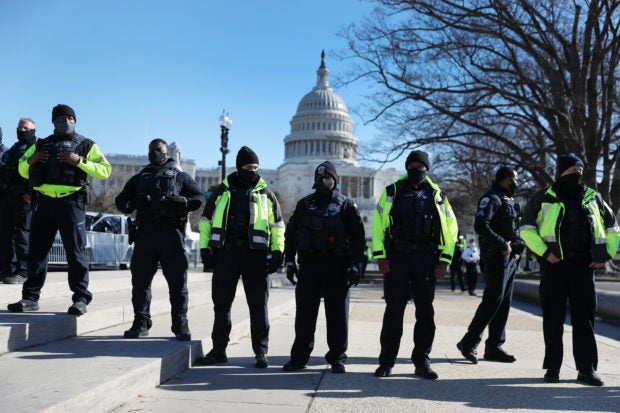 WASHINGTON, DC – JANUARY 07: Members of the Metropolitan Police Department of the District of Columbia are seen in front of the U.S. Capitol a day after a pro-Trump mob broke into the building on January 07, 2021 in Washington, DC. Congress finished tallying the Electoral College votes and Joe Biden was certified as the winner of the 2020 presidential election. Joe Raedle/Getty Images/AFP

WASHINGTON – President-elect Joe Biden launched a blistering attack on Donald Trump on Thursday and the top two Democrats in Congress called for his immediate removal from office over the storming of the US Capitol by his supporters.

Transportation Secretary Elaine Chao became the first member of the cabinet, meanwhile, to step down in protest of Wednesday’s shocking attack on the halls of Congress.

Biden, at an event introducing his nominee for attorney general, declined to address the mounting demands for Trump’s removal but accused the outgoing Republican leader of an “all-out assault on the institutions of our democracy.”

“Yesterday, in my view, was one of the darkest days in the history of our nation,” said the 78-year-old Democrat, who is to be sworn in as the 46th US president on January 20.

“They weren’t protesters,” he said of the Trump supporters who attacked the Capitol while a joint session of Congress was certifying Biden’s November 3 election victory. “They were a riotous mob, insurrectionists, domestic terrorists.”

“The past four years, we’ve had a president who’s made his contempt for our democracy, our Constitution, the rule of law clear in everything he has done,” he said.

“This is an emergency of the highest magnitude,” Pelosi said, describing Trump as a “very dangerous person.”

“By inciting sedition, as he did yesterday, he must be removed from office,” she said. “While it’s only 13 days left, any day can be a horror show for America.

“If the vice president and the cabinet do not act, the Congress may be prepared to move forward with impeachment,” Pelosi said.

Schumer said Trump “should not hold office one day longer.”

“What happened at the US Capitol yesterday was an insurrection against the United States, incited by the president,” he said.

Republican congressman Adam Kinzinger, a frequent Trump critic, said it was time to “end this nightmare” and also called for invoking the 25th Amendment, which has only been used previously when a president has undergone a surgical procedure.

Invoking the amendment would make Pence president for the remaining two weeks the administration has in office.

Speaking to CNN, retired Marine Corps general John Kelly, who served as Trump’s chief of staff for 18 months, said the cabinet should consider the 25th Amendment but “it’s only 13 more days.”

“He can give all the orders he wants but no one is going to break the law,” Kelly said.

Chao, who is married to Republican Senate majority leader Mitch McConnell and is one of Trump’s longest-serving cabinet members, announced she would resign as of Monday.

“Yesterday, our country experienced a traumatic and entirely avoidable event as supporters of the president stormed the Capitol building following a rally he addressed,” Chao said.

“As I’m sure is the case with many of you, it has deeply troubled me in a way that I simply cannot set aside.”

Mick Mulvaney, the US special envoy to Northern Ireland and also a former White House chief of staff, also announced he was resigning and said he expected others to step down.

In an angry, rambling speech outside the White House, Trump urged his supporters to march to the Capitol and demanded that Pence, who ceremonially led the joint session of Congress, intervene to reverse their election defeat.

Pence refused and he was ultimately the one who announced to lawmakers his and Trump’s loss to Biden and Kamala Harris, the incoming vice president.

Trump responded to Congress’s late night certification of Biden’s election win by pledging an “orderly transition” — but once again refused to concede, repeating the unfounded allegations of election fraud that fueled the mob assault on Congress.

“Even though I totally disagree with the outcome of the election, and the facts bear me out, nevertheless there will be an orderly transition on January 20th,” Trump said.

“While this represents the end of the greatest first term in presidential history, it’s only the beginning of our fight to Make America Great Again!”

Trump released his statement through an aide’s Twitter feed after being suspended by the social media platform — a move also taken by Facebook.

During the mayhem in Congress, security forces fired tear gas to drive out the flag-waving crowds and police said a woman, reportedly a Trump supporter from California, was shot by police and killed. Three other deaths were reported on the Capitol grounds but the circumstances remained unclear.

The chaos at the Capitol came as Biden enjoyed a new triumph with Democrats projected to win two Senate seats in runoffs in Georgia — handing the party full control of Congress and dramatically increasing Biden’s ability to pass legislation and gain Senate confirmation of his nominees.

As the Justice Department and FBI vowed to charge those involved in the violence, Biden announced  he was nominating Merrick Garland, a federal appeals court judge who was denied a seat on the Supreme Court by Republicans five years ago, to be his attorney general.

There was bipartisan anger brewing meanwhile over the failure of law enforcement to prevent the mobs from entering Congress and calls for the resignation of the head of the 2,300-strong Capitol Police force.