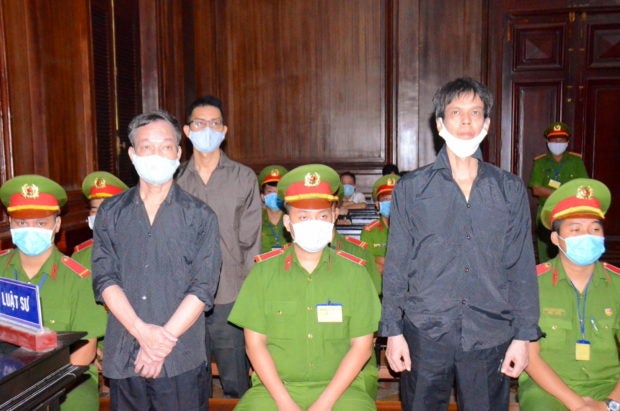 HANOI — A court in Vietnam on Tuesday sentenced three freelance journalists known for their criticism of government to between 11 and 15 years in prison, after finding them guilty of spreading anti-state propaganda.

Dung established the Independent Journalists Association of Vietnam in 2014, which police said had sought regime change.

The party, under the leadership of 76-year-old Nguyen Phu Trong, has intensified a crackdown on dissent ahead of its five-yearly congress due to be held later this month.

Dung was jailed for 15 years and Thuy and Tuan 11 years each.

“The harsh sentencing of Thuy and two other independent journalists is a blatant assault on basic freedoms and flies in the face of the freedom of expression enshrined in Vietnam’s constitution,” RFA President Stephen Yates said in a statement.

The U.S. State Department, which has developed close ties with Hanoi while remaining concerned about its human rights record, said it was disappointed by the latest sentences, calling them “harsh” and “the latest in a worrisome trend.”

“We urge the Vietnamese government to ensure its actions are consistent with the human rights provisions of its constitution and its international obligations and commitments,” a spokesperson said.

Amnesty International said the sentences underscored Hanoi’s contempt for free media, particularly ahead of the congress.

“Even by its own deeply repressive standards, the severity of the sentences show the depths being reached by Vietnam’s censors,” said its deputy regional director, Emerlynne Gil.

“If the ruling party is so assured in its leadership, it should demonstrate its confidence by respecting civil and political rights,” its deputy Asia director Phil Robertson said.