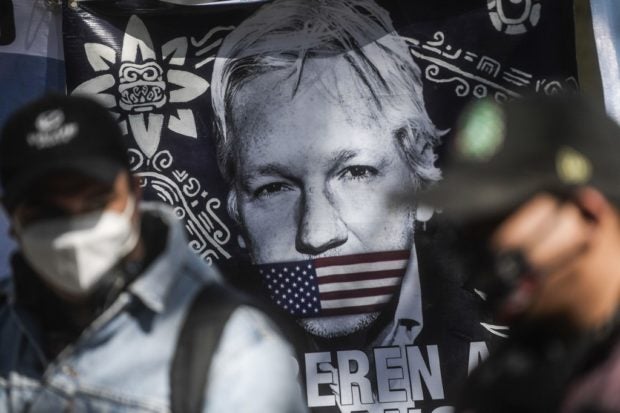 A flag is seen during a protest in front of the British embassy to demand the freedom of Wikileaks founder Julian Assange, in Mexico City, on January 4, 2021. After British justice denied the US extradition request, Mexican president Andres Manuel Lopez Obrador offered political asylum to Assange. Photo by Pedro PARDO / AFP

WASHINGTON — WikiLeaks founder Julian Assange dodged a bullet Monday when a British judge refused to extradite him to the United States to face charges under an espionage law, but experts say his case remains an ominous threat to press freedom.

Judge Vanessa Baraitser said the US charges were justified against the 49-year-old transparency advocate, who stunned the world in 2010 with the publication of hundreds of thousands of classified military and diplomatic documents.

But Baraitser ruled that his mental health problems raise the risk of suicide in a US jail.

Her decision, and the US Justice Department’s determination to appeal it, left in place the first-ever use of the US Espionage Act to prosecute someone for publishing state secrets, long held as allowed under the US Constitution.

That leaves his case, and the department’s view of his activities, an ongoing threat against journalists who cover national security and defense issues, where leaked classified information is crucial.

Bruce Brown, executive director of the Reporters Committee for Freedom of the Press, called Baraitser’s agreement with the US indictment of Assange “deeply troubling,” even if she would not extradite him.

“The mere act of publishing secrets that the US government doesn’t want the public to see is not akin to spying,” he said in an emailed statement.

“The government’s legal theories in this case remain dangerous to core tenets of freedom of the press.”

The British court “endorses the US prosecution even as it rejects the US extradition request,” said Jameel Jaffer, director of the Knight First Amendment Institute at Columbia University.

“The result is that the indictment of Assange will continue to cast a shadow over investigative journalism,” he said on Twitter.

WikiLeaks’ 2010 release of the US files rocked the US government, exposing the underside of the US military and diplomatic operations.

But they decided that charging Assange could mean also prosecuting powerful US news organizations for publishing similar material, legal fights likely to be lost.

While WikiLeaks asserted it was constitutionally protected as a journalistic endeavor, in 2017 the intelligence and justice chiefs of President Donald Trump’s new administration rejected that view and pushed for an indictment.

The Justice Department unveiled its indictment in 2019 and expanded it last year, announcing it would seek Assange’s extradition from Britain to stand trial in the Alexandria, Virginia federal court, which specializes in spy cases.

It charged Assange under the Espionage Act and computer crimes laws with multiple counts of conspiring with and directing others, over 2009-2019, to illegally obtain an release US secrets.

In doing so he aided and abetted hacking, illegally exposed confidential US sources to danger, and used the information to damage the United States, the charges allege.

“No responsible actors — journalist or otherwise — would purposefully publish the names of individuals he or she knew to be confidential human sources in war zones, exposing them to the greatest dangers.”

Jaffer called the charges “an unprecedented attack on press freedom, one calculated to deter journalists and publishers from exercising rights that the (Constitution) should be understood to protect.”

Baraitser’s conclusion that Assange went beyond what journalists do and that the US case against Assange would stand up in British courts appears to support that.

The United States has also suggested that Assange has violated secrets laws of its intelligence partners, and that they could try him.

But media experts say Assange’s work cannot be separated from what Washington’s league of national security journalists do and the US is criminalizing it.

Reporters regularly seek out classified information, and undertake the type of cooperation with sources to obtain it that Assange is accused of, said Cindy Cohn, executive director of the Electronic Frontier Foundation.

“Investigative journalism –including seeking, analyzing and publishing leaked government documents, especially those revealing abuses — has a vital role in holding the US government to account,” she said in a statement.