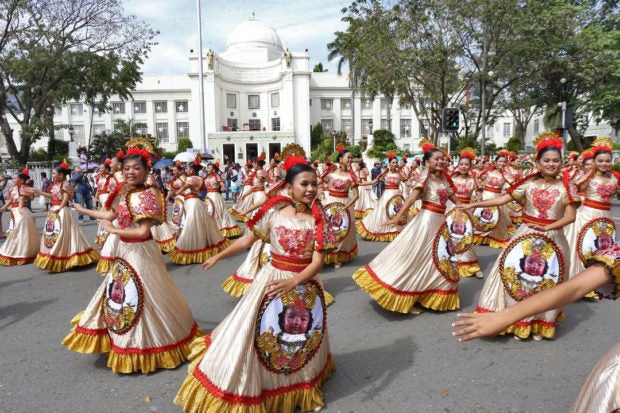 HEALTH CONCERNS Cebu City officials say they are prepared to stage the Sinulog, a religious and cultural festival in honor of Señor Sto. Niño, or the Child Jesus, minus the crowd this year but the police have raised concerns over health and safety protocols. Sinulog was among the events that pushed through last year before the pandemic struck in March. —JOWENCE NIÑAMENDOZA

CEBU CITY, Cebu, Philippines — Top police officials and a city councilor representing the national government in containing the spread of the new coronavirus disease (COVID-19) have opposed the holding this month of Sinulog, one of the biggest religious and cultural festivals in the country, amid the pandemic.

Police Lt. Col. Glenn Mayam, chief of the operation management division of the Central Visayas police, said he was surprised to learn from news reports that the city government was preparing for the grand Sinulog showdown on Jan. 17.

He said the Regional Inter-Agency Task Force (RIATF) on COVID-19, during a meeting in November, made it clear that the Sinulog would not be staged this month because of the health crisis. The festival in honor of the Sto. Niño, or the Child Jesus, usually draws millions of people from other parts of the country and abroad.

“We were actually caught off guard because the city government had not informed us about its decision to go on with the Sinulog. Even the solemn processions and other religious activities outside the church were canceled. Now here comes the cultural aspect of the celebration, which according to city officials, will continue,” Mayam said on Monday.

He said the local police and Councilor Joel Garganera, deputy chief implementer of the city’s emergency operations center (EOC), would recommend to the RIATF to stop this year’s Sinulog to prevent any mass gathering and the spread of COVID-19.But Vice Mayor Michael Rama, who was appointed by Mayor Edgardo Labella to lead the festival preparations, said the executive committee had been inviting a representative from the EOC during their meetings, but no one came.

“We will not stop preparing for the Sinulog. Right now, we are 90-percent ready,” he said.

Rama said he would present to the RIATF the health and security measures that would be implemented during the Sinulog to ensure that the activity would not contribute to the spread of the virus.

“We [city government] want to assure the task force that people will not violate any protocol, especially that the Sinulog will be off-limits to spectators,” he said.

The city government earlier allocated P40 million for Sinulog 2021, which would be streamed live to avoid mass gathering.

Rama said the number of dancers per contingent would be limited to only 50 while the use of backdrops and rolling props during performances would be prohibited.

As of Dec. 28, 2020, at least 20 groups had registered or expressed interest in participating in the Sinulog showdown. The number is less than last year’s 31 contingents.

Organizers said this year’s Sinulog would be held at the parking area of a mall at South Road Properties, more than 4 kilometers away from its usual venue in the city’s downtown area.