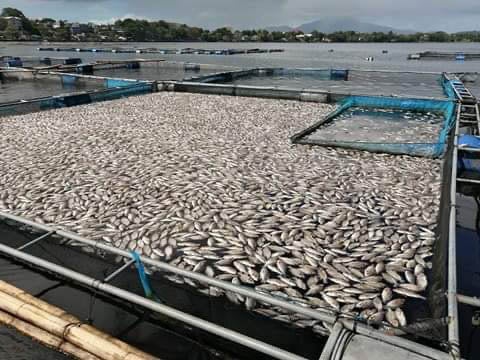 BELLY UP Tilapia cultured in fish cages in Sampaloc Lake in San Pablo City turn belly up after what experts call an “overturn,” a natural phenomenon triggered by a sudden shift in the weather conditions. —PHOTO COURTESY OF LAGUNA LAKE DEVELOPMENT AUTHORITY

Sammy Malvas, BFAR director for Calabarzon (Cavite, Laguna, Batangas, Rizal and Quezon), said tilapia appeared to be “gasping for air” when they surfaced inside fish cages in Sampaloc Lake, the largest of the seven interconnected lakes in San Pablo City.

The Laguna Lake Development Authority (LLDA) also reported that wild “ayungin” and bighead carps swam toward the shore that day.

Officials have urged commercial fish growers in other major water bodies to stay on the lookout for fish kill during this time of the year.

“According to one cage operator, about two tons [of tilapia died]. There were several others caught alive and which [residents] were still able to sell. Others [cage operators] went for an early harvest,” Malvas said in a phone interview.

Fish cages occupy 9.6 hectares of the 100-ha Sampaloc Lake, Jocelyn Sta. Ana, chief of the LLDA Environmental Laboratory and Research Division, said in a separate interview. The lake produces about 600 metric tons of tilapia annually, according to the BFAR.

On Monday, both the LLDA and the BFAR sent out teams to collect lake water samples for laboratory tests and to record losses, although officials believed what likely happened was a lake “overturn.”

An overturn, locally referred to as “duong,” is a natural phenomenon usually during the cold months when the top and bottom water of the lake switch, thus reducing the amount of dissolved oxygen that fish needs to survive.

Malvas urged growers in the Laguna de Bay covering parts of Laguna and Rizal provinces and Metro Manila and in the Taal Lake in Batangas province, which produce bigger volumes of freshwater fish, to watch out for duong, although none has been reported yet in these lakes.

“[Locals] say this happens normally so they don’t really stock much [fingerlings] during this time,” he said. INQ