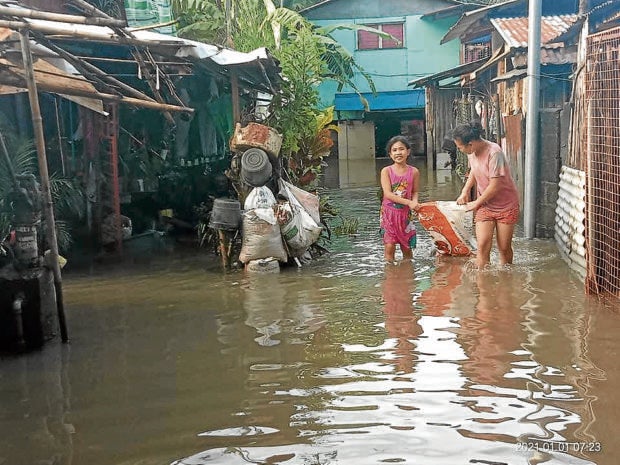 WET START FOR 2021 Floodwater dampened the New Year’s Day celebration in this neighborhood in Negros Occidental province on Friday. Heavy rains swelled rivers in several towns, causing flash floods on New Year’s Eve and forcing thousands of families in the cities of Victorias, Talisay and Silay, and EB
Magalona town to evacuate to emergency shelters or climb on rooftops to escape from the rising water. Floods and landslides also hit several Bicol provinces. —CONTRIBUTED PHOTO

Parts of Western Visayas and Southern Luzon greeted the New Year inundated by heavy rain and floods which forced more than 17,000 people to flee their homes in Negros Occidental province, officials said on Friday.

The regional Office of Civil Defense (OCD) in Bicol reported that many communities in 23 towns and a city in the provinces of Sorsogon, Camarines Sur and Albay were hit by floods and landslides. One man died after he was electrocuted in a flooded street in Baco town, Oriental Mindoro province.

In Victorias City in Negros Occidental, the Guzman family spent the first hours of 2021 on the roof of their home where they were forced to flee by a flash flood that swamped Canetown Subdivision in Barangay 19-A.Abraham Guzman said that 30 minutes before midnight on Thursday, rushing water suddenly filled the streets and not long after reached neck-deep.

He said he, his girlfriend and parents decided to abandon their New Year celebrations and climbed to the roof due to the fast-rising flood, leaving their “media noche” feast floating in the muddy floodwater.

“It was unexpected. We couldn’t believe this tragedy happened during the New Year. We are still dealing with the effects of COVID-19 and this happened,” Abraham told the Inquirer, adding that everyone was surprised as they only experienced a brief light rain.

They later learned that heavy rain that fell on surrounding mountains had swollen a nearby river but everyone was unaware because of the New Year revelry, according to Lunalie Dawn Desusa.

“Usually, there is a warning signal from the siren of the nearby sugar mill but this time there was none. We were shocked when the water came rushing around midnight,” Desusa added.

Residents of Canetown Subdivision will spend the first days of 2021 cleaning up the cakes of mud left in their homes and neighborhoods.

Zephard Caelian, head of the provincial disaster management program dvision, said heavy rain and the high tide on Thursday caused the inundation of Victorias, and the cities of Talisay and Silay, and EB Magalona town.

Other Victorias residents sent text messages asking for help from their rooftops as the floodwater rose, he said.

“We had a fireworks display to usher in the New Year at the city plaza. And here comes the flood that caught everybody by surprise after midnight,” Victorias Mayor Francis Palanca said.

“It was raining in the hinterlands for days. The soil has been soaked, so we were hit by runoff water,” he added. An initial report showed that 413 families, or 1,508 people, had evacuated in Victorias.

The Philippine Atmospheric, Geophysical and Astronomical Services Administration (Pagasa) on Friday said that there was no storm over these areas in the Visayas and in the Bicol region.

It said the prevailing tail end of a frontal system, or the clash of the cold air from the northeast monsoon and warm air brought by easterlies, brought the rains which would continue over parts of Luzon on Saturday.

In Negros Occidental, many families in Bicol also were soaked as the clock ushered in 2021, celebrating the New Year at evacuation centers.

Kate Danielle Baylon, 22, whose house was submerged in ankle-deep water in Nabua town, Camarines Sur, said her neighborhood in San Esteban village was used to being flooded during heavy rain but no one expected floods on New Year’s Day.

“New Year’s celebrations of my childhood were not like this,” she told the Inquirer. “They were mostly festive and there were fireworks displays kids look forward to.”

At 3 p.m. on Friday, the Nabua municipal disaster management office warned the public that water from Buhi Dam would cause more floods on Saturday.

The rains caused tributaries of the Bicol River to overflow into spillways, roads and submerged some villages in Sorsogon, Camarines Sur and Albay provinces, officials said.

The floods in Sorsogon were caused by the swelling of the rivers in the towns of Juban, Bulusan and Gubat.

Landslides blocked at least seven roads in Sorsogon. Eleven landslides were reported in nine villages in the three towns and in Sorsogon City.

About 30 families in Sagñay town in Camarines Sur were evacuated on New Year’s Eve due to heavy rain, which started on Tuesday, according to Gremil Alexis Naz, the OCD Bicol spokesperson.

The rains triggered floods and landslides in at least six other towns in Camarines Sur.

Landslides also were reported in some villages in the towns of Libmanan, Ginorangan and Lagonoy, all in Camarines Sur, according to the provincial disaster management office.

In Legazpi City, capital of Albay, rain submerged Vel Amor subdivision under about 60 centimeters of floodwater.

The bad weather also forced the cancellation of two flights from Manila to Naga Airport in Pili, Camarines Sur, on Thursday.

Ian Pastrana, the man who was electrocuted on Thursday night while wading through a flooded street in Baco, died on the way to a hospital, according to Vice Mayor Eric Castillo.

The Bicol region and Quezon and Palawan provinces will continue to experience light to moderate and heavy rain on Saturday due to the tail end of a frontal system, the weather agency said.