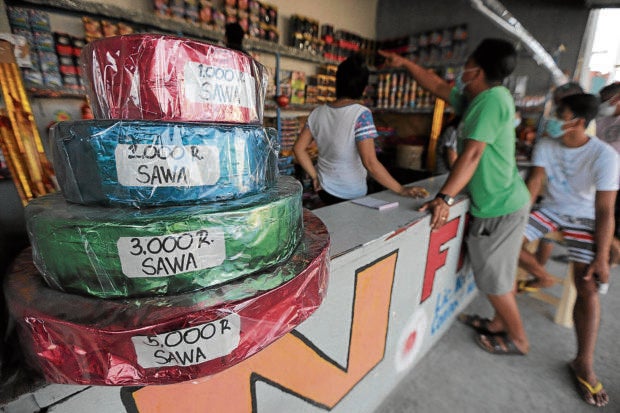 NEW YEAR RUSH Stalls selling fireworks and pyrotechnic devices in Bocaue, Bulacan, have reported an increase in the number of buyers after Christmas, with store owners resorting to continuous operation until New Year’s Eve as they hope to recover from losses brought about the pandemic and the government’s regulation of firecracker use. —GRIG C. MONTEGRANDE

BOCAUE, Bulacan, Philippines — Fireworks and other pyrotechnic devices have begun to leave store shelves in this town ahead of the New Year’s Eve revelries, but vendors expect a sharp drop in profit compared to last year due to the coronavirus pandemic.

Stores in this so-called fireworks capital are open 24 hours until New Year’s Eve to accommodate buyers and offset their losses.

Minia Camlian, a fireworks trader, said buyers began flocking to the stretch of stores along MacArthur Highway after Christmas Day. “We expect more customers until Dec. 31. By then, we could only hope that all our stocks would be sold out,” she told the Inquirer.

Among the best sellers were aerial displays and sparklers, such as “luces,” “kwitis” and fountains.

Camlian said she was anticipating fewer buyers this year after the ban on firecrackers and other pyrotechnic devices was imposed in Metro Manila.

In the last few years, she said, the stores were earning more than P700,000 from sales of fireworks during the holidays. “We would be lucky to earn at least a third of our incomes in the previous years,” she said.

“This has been our main source of income for decades. We just hope that the government will not ban it all entirely,” she added.

At least 36 fireworks manufacturers and dealers have to close shop this year due to lack of capital.

Cristina Valenzuela, chief of business development division of the Department of Trade and Industry (DTI) in Bulacan, said the agency had given financial aid worth P1.91 million to displaced traders and workers in 160 small and medium enterprises in the province.

They were each given P10,000 worth of goods, frozen products and rice as start-up capital for “sari-sari” (variety) stores.

The DTI will also open a Negosyo Center in Bocaue by next year to help more enterprises, including those in the pyrotechnic industry, should President Duterte impose a nationwide firecracker ban.