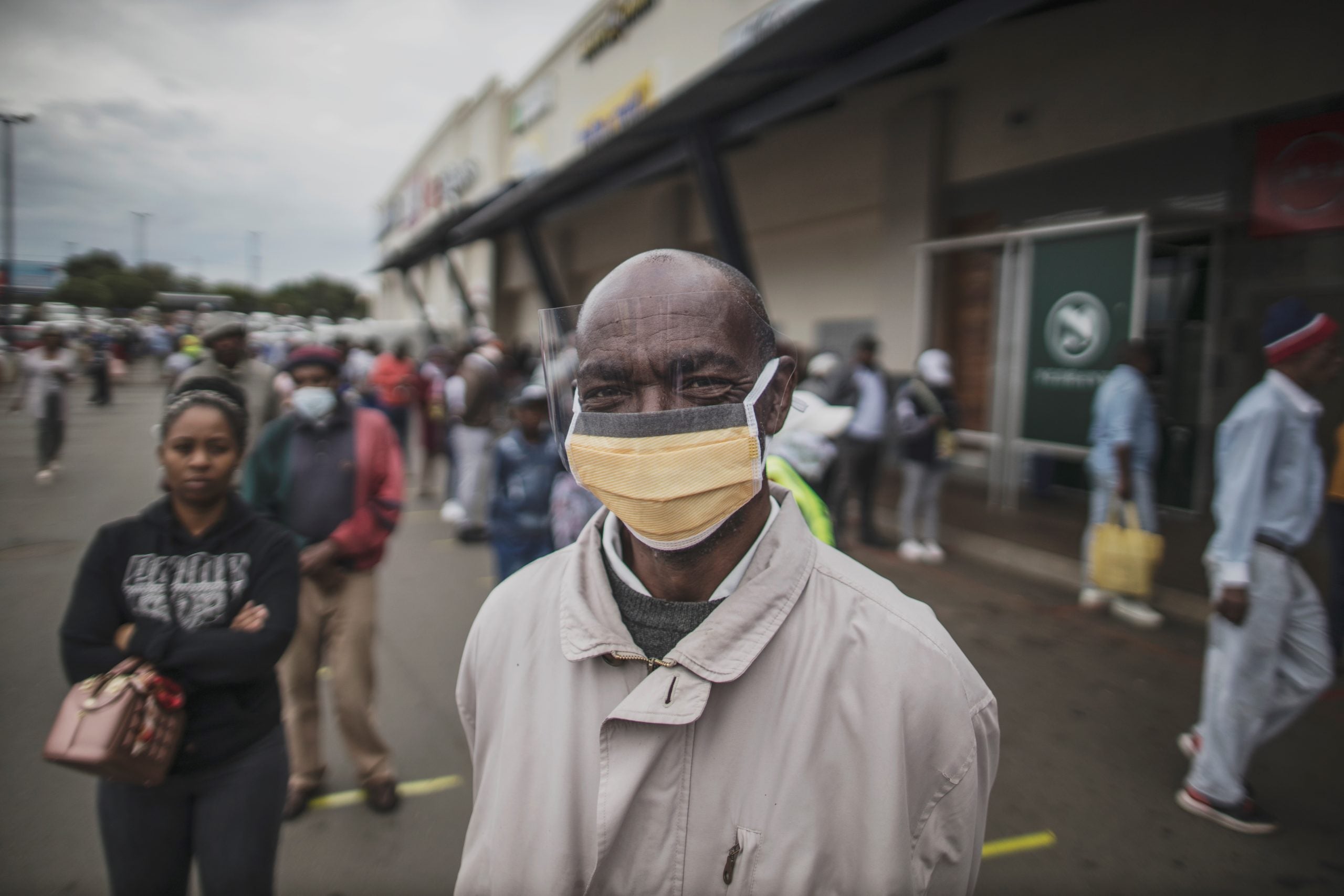 (FILES) This file photo taken on March 30, 2020, shows an elderly man from Soweto, covering his face with a face shield while queueing at a SASSA (South African Social Security Agency) pay-point in Soweto. – South African President Cyril Ramaphosa on December 28, 2020, announced a ban on alcohol sales and said mask-wearing would be mandatory in public as his country became the continent’s first to record one million coronavirus cases. Ramaphosa said during a televised speech that alcohol would be temporarily banned from midnight to help emergency services already under pressure. He also announced it would be “compulsory for every person to wear a mask in public spaces,” saying it was a “drastic measure, now necessary”. (Photo by MARCO LONGARI / AFP)

JOHANNESBURG — South Africa banned alcohol sales and made masks mandatory in public from Tuesday after a surge in coronavirus cases, as the World Health Organization warned that pandemics far more deadly than Covid-19 may lie ahead.

Nations around the world are struggling with winter spikes in infections that have pushed the global caseload close to 81 million, even as the rollout of vaccines gathers pace in North America and Europe.

South African President Cyril Ramaphosa on Monday announced a ban on selling alcohol and said face masks will be compulsory in public after his nation became the first in Africa to record one million cases.

“We have let down our guard, and unfortunately we are now paying the price,” said Ramaphosa, blaming “super-spreader” social events and an “extreme lack of vigilance over the holiday period” for the spike.

Surging cases also forced authorities in Rio de Janeiro — one of Brazil’s worst-hit cities — to announce Monday that they will block access to beaches on December 31 to prevent crowds celebrating New Year’s Eve.

And in Spain, where the death toll has topped 50,000, the health minister said the government would set up a registry of people who refuse to be vaccinated and share it with other European Union member states.

Vaccinations in Spain and other EU countries started over the weekend, and authorities fear vaccine hesitancy and rejection could hamper those efforts — especially because of misinformation campaigns on social media.

That was not a concern with 75-year-old Jacques Collineau, resident of an old people’s home in Joue-les-Tours, France.

“Fear? Fear of what? I’ve been vaccinated for the flu before, now it’s the same thing,” Collineau said as he got the shot on Monday.

‘This is not the big one’

The coronavirus has devastated lives and economies across the globe, but the WHO warned Monday that worse pandemics could like ahead, urging the world to get serious about preparedness.

“This is a wake-up call,” WHO emergencies chief Michael Ryan told reporters at a briefing marking a year since the UN agency first learned of the new virus spreading in China.

“This pandemic… has spread around the world extremely quickly and it has affected every corner of this planet, but this is not necessarily the big one,” Ryan added.

“We need to get ready for something that may even be more severe in the future.”

While huge scientific progress was made to study the virus and develop vaccines at record speed, WHO senior advisor Bruce Aylward cautioned that the world was far from ready for the next pandemic.

“We are into the second and third waves of this virus and we are still not prepared to deal with and manage those,” he said.

“While we are better prepared… we are not fully prepared for this one, let alone the next one.”

The warnings were backed up by the worrying figures and trends reported worldwide.

South Korea, one of the nations hailed for its success during the first months of the pandemic, on Tuesday logged its highest daily death toll since the beginning of the pandemic as it battled a third wave of infections.

India, with the second-biggest caseload in the world, reported the detection of the new coronavirus strain, but officials said the nation’s pandemic guidelines have not changed because of it.

Highlighting the frustration and suffering caused by the crisis, submissions from around the world came in for a Good Riddance Day celebration in New York City.

The submissions were printed and then shredded, while the host of the event pulverized a 2020 pinata.

When Westbury, New York, resident Raul was asked what he wanted to say good riddance to, he responded: “Like anybody else, I want to get rid of the coronavirus. That’s it!”