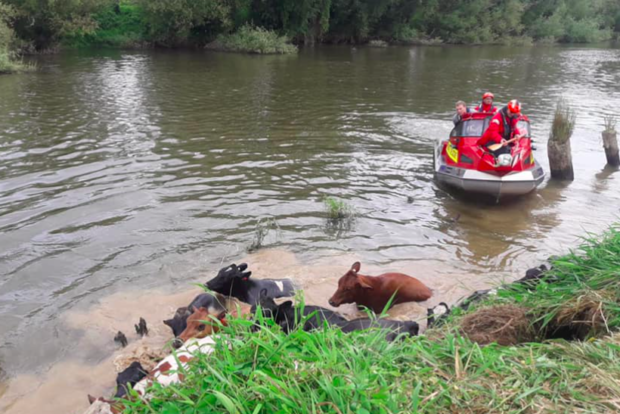 Volunteer firefighters of the Ngaruawahia Fire Brigade in New Zealand came to the rescue of 18 cows that were stranded in the Waipa River.

The volunteers of the fire brigade took to the Waipa River to carry out their rescue mission on Dec. 23, as per its Facebook post on the same day.

“With the help of local resources; Ngaruawahia’s jet ski, Huntly’s rescue boat, a digger, Animal control and some helpful knowledge from the farmers, [we] were able to save all of the cattle from the river,” the fire brigade stated. “It just shows what can be achieved when everyone works together.”

Today we got called to help rescue 18 cows stuck in the Waipa river. With the help of local resources; Ngaruawahia's jet…

Senior station officer Marty Kampman described the scene as “unbelievable,” according to a report by Stuff on Dec. 24.

“There was nowhere else they could go really,” Kampman said in the report. “It was safety in numbers.”

A local farmer had suggested to the volunteers to dig a trench in the river bank, which allowed them to safely herd the animals out of the water. The cows were smoothly brought to safety, save for one, which got stuck in the mud for 15 minutes and had to be heaved with ropes.

Not much is known on how the cows wound up in the river, as per report, although Kampman surmised they were probably in the water for around 10 hours. Nevertheless, it was one rescue mission to remember, and perhaps the strangest one in his more than four decades of service.

“They were very worn out and tired,” he was quoted as saying. “We’ve had horses, we’ve had sheep, we’ve had dogs, but this is the most unusual one, just the sheer number of cows.” Cody Cepeda/JB