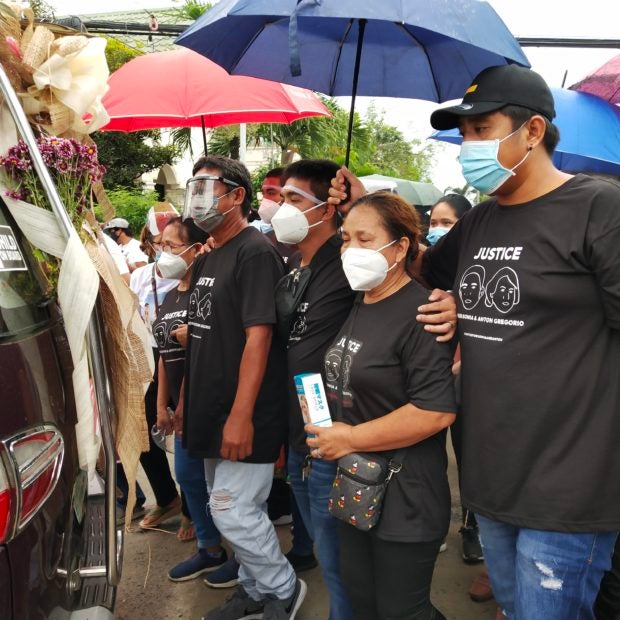 Mourners came in droves to join the grieving relatives who will bury the two victims of the fatal shooting in Paniqui, Tarlac on Sunday morning. Photo by Maria Adelaida Calayag

PANIQUI, Tarlac — Cries of grief and an outpouring of love surrounded the funeral ceremony for Sonya Gregorio, 52, and her son Frank Anthony, 25, as their family bade an emotional farewell a week after the two were brutally killed by an off-duty policeman.

Rose (not her real name), 14, broke down in tears as the caskets of her mother and brother were opened during the funeral service.

Relatives tried to console Rose who stood beside the caskets, allowing her to look at her mother and brother for the last time.

Rose then turned to Florentino, her father, seeking for confirmation. 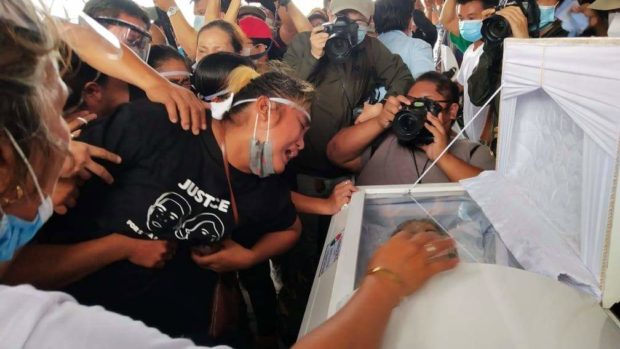 The grieving relatives of the victims of the fatal shooting in Paniqui, Tarlac bid an emotional farewell during the funeral service on Sunday. Sonya Gregorio, 52, and her son Frank Anthony, 25, were buried at the Paniqui Garden of Angels Memorial Park as their family and supporters continue to seek justice for the twin murders. INQUIRER photo / Maria Adelaida Calayag

[Mother is alive, they were not attacked, they are alive! They say they will come back. Mother promised. Wha pa? Why?]

More than 1,000 people turned up during the burial at the Paniqui Garden of Angels Memorial Park in Barangay Salomague here.

They wore white and black shirts printed with messages calling for justice for the two murder victims.

Sonya and Frank were shot dead at point-blank range in front of their house by an off-duty policeman on Dec. 20.

The suspect, Senior Master Sergeant Jonel Nuezca, remained in the custody of the Paniqui municipal station pending a commitment order from a court. He is facing double murder charges.

The killings, caught on video and went viral on social media, were reportedly triggered by a confrontation between the neighbors over Frank’s firing of “boga” or an improvised firecracker. The fight was compounded by an old property dispute, investigators said.

Relatives of the two victims wore black shirts printed with messages crying for justice as they led the funeral march for Sonya and her son Frank on Sunday morning.

They were escorted by some 250 riders from the different chapters of the Police Hotline Movement Inc. in Tarlac towns of La paz, Camiling, Concepcion and in Nueva Ecija, La union and Metro Manila.

According to Florentino Gregorio, widower of Sonya, colleagues of Sonya sponsored the portion of a lot where the victims will be buried. Sonya used to work there as a lot agent.

Suspect Nuezca shot Sonya and Frank at a point-blank range in front of their house on Dec. 20. Investigators said an old family dispute over property and right-of-way triggered the murders.