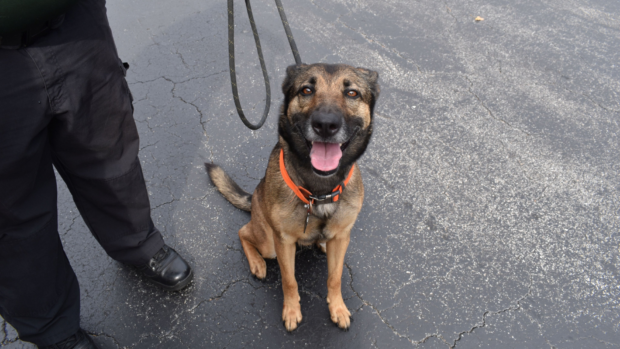 A woman was arrested after she hurled a German shepherd off a motel’s second-floor balcony in Florida, USA.

Allison Murphy, 35, initially threatened to jump from the said balcony after allegedly attacking one of the guests on Dec. 14. Upon hearing this, an employee quickly informed the police about her, as per NBC-affiliate WESH the day after.

However, Murphy had changed her mind and returned to her rented room when the police arrived. When she finally opened her door, she stepped out with a 40-pound German shepherd and suddenly threw it off the balcony.

An officer then tackled her to the ground, as seen in bodycam footage the Volusia Sheriff’s Office posted on YouTube. After placing handcuffs on Murphy, they transported her into their police car.

Despite the incident, the animal managed to land on her feet with her leash still attached and headed for a road. Meanwhile, a nearby food-truck operator named Jose Carnot spotted the dog making a run for the busy road and immediately caught her.

Carnot then returned the dog to the police, who named her Miracle, in reference to how she survived the fall. According to the report, doctors assured that she did not sustain any major injuries, although they did remove a sewing needle lodged in her thigh.

Following Murphy’s arrest, a judge has ordered for her to be temporarily held without bond as they assess her mental health. She is currently in the county jail facing charges of animal cruelty and resisting arrest with violence, as per CBS-affiliate WKMG.

A family has since volunteered to foster Miracle while the animal rescue center tries to gain custody of her. Ryan Arcadio /ra