MANILA, Philippines — As nations scrambled to secure doses of coronavirus vaccine from drug manufacturers, the Philippines’ Health chief had been accused of “dropping the ball” in acquiring the vaccine deal with a United States-based pharmaceutical.

Serious allegations made by Senator Panfilo Lacson against Health Secretary Francisco Duque III has again placed the beleaguered official in the hot seat, an unwelcome development, considering that the latter has been dogged by many a controversy since the start of the pandemic.

According to Lacson, Duque “failed” to submit documents, such as a confidentiality agreement, needed to finalize the COVID-19 vaccine deal with US-based Pfizer/BioNTech. 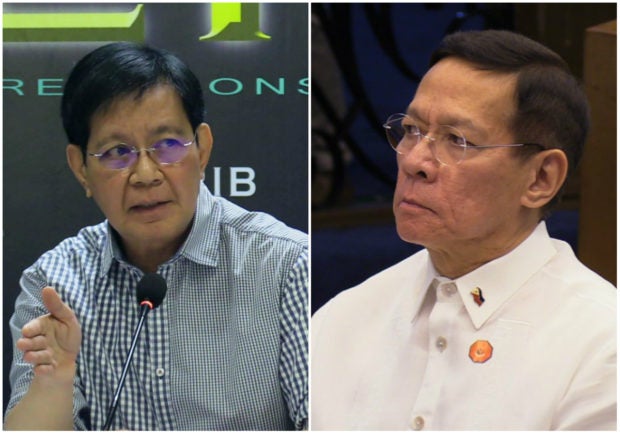 Lacson was echoing the sentiments of Foreign Secretary Teodoro Locsin Jr. on Twitter on Tuesday that the government was about to secure 10 million doses of COVID-19 vaccine from  Pfizer until someone “dropped the ball.”

“No deadline was set by Pfizer, nothing in all our documents,” Duque said in a television interview over ABS-CBN News Channel.

Pfizer’s vaccine uses mRNA, a genetic molecule that carries the instructions for making proteins in our body.

He further said that the CDA with Pfizer was only submitted on August 11.

“The CDA was in fact intended to be signed, per Pfizer’s request, by the Office of the President,” he said.

“That would’ve spared Pfizer from signing a CDA with many other government agencies. So isa na lang dapat pero nagkaroon ng iteration, pinag-aralan ng legal ng DOST (Department of Science and Technology) legal ng Office of the Executive Secretary, technical and legal offices of DOH, we have to clear the provisions of the non-disclosure agreement,” he added.

(That would’ve spared Pfizer from signing a CDA with many other government agencies. So it was supposed to be only one office but it went through iteration, the legal of DOST, Office of the Executive Secretary and the technical and legal offices of DOH, we have to clear the provisions of the non-disclosure agreement.)

Here is the timeline on the CDA process between Pfizer, DOH, and other government agencies as per Duque:

June 24
According to Duque, around this time, Pfizer sent their overview of its candidate vaccine and development program.

June 29
“DOH through the pharmaceutical division referred the proposal to the DOST-PCHRD (Philippine Council for Health Research and Development) as the lead agency in the management of vaccine development for COVID-19 response,” he explained.

“[T]his is in conjunction w the IATF (Inter-Agency Task Force) resolution designating the DOST-PCHRD as the lead agency for evaluation and in parallel, the vaccine would’ve been evaluated by the ethics review (of) FDA (Philippine Food and Drugs Administration),” he continued.

August 6
Duque said that they sent a letter to Pfizer, informing the company to communicate with DOST.

August 7
He then said that Pfizer met with DOH officers on this day to discuss and talk more about the mRNA technology that is being used for the COVID-19 vaccine.

“That’s where I asked questions. Sabi ko, meron na ba experience ang ibang technology with an mRNA vaccine. They said yes, for HIV AIDS that’s about it. There has been no experience.  DOH neither has an experience in its long years of immunization, we never had this kind of technology,” he added.

August 11
Few days following the meeting, Pfizer sent the draft for the CDA which according to Duque, was meant to be signed by the Office of the Executive Secretary “on behalf of all the government agencies.”

August 26
“We endorsed to the legal service the comments concurred by the relevant technical offices,” said Duque.

He clarified that he cannot disclose a copy of the CDA to the public otherwise he can be sued by Pfizer.

September 4
“Pfizer met with DOH officers, DOST, (Executive Secretary Salvador) Medialdea, to provide updates on their vaccine developments. So sinabi nila there are two vaccines qualified in terms of safety and efficacy profile after phase one and phase 2 clinical trials.”

(Pfizer met with DOH officers, DOST, Executive Secretary Salvador Medialdea, to provide updates on their vaccine developments. They said there are two vaccines qualified in terms of safety and efficacy profile after phase one and phase 2 clinical trials.)

Duque earlier explained that Pfizer does not want to conduct its Phase 3 clinical trials in the Philippines.

“We would’ve preferred to have clinical trial phase three in the Philippines just to be able to clear for ethnic diversity because not all races will respond when it comes to potential side effects,” he said.

He further stated that during the said meeting, Pfizer talked to them about the “potential supply of 100 million doses by end of 2020 subjected to regulatory approval.” A projected 1.3 billion doses was also mentioned by Pfizer which will be available by 2021.

However, the health chief clarified that the 10 million doses are not up for grabs just for the country.

“You can ask the vaccine czar about this, but (the) ten million is going to be for the world market outside of those given to originating countries like the US – which I think will corner the bulk of the vaccine supply.”

September 17
The DOH sent another letter to Executive Secretary Medialdea’s office. In the letter, Duque said that they detailed that on September 11, Pfizer received their comments on the CDA.

(It goes through an iteration, back and forth, back and forth. We will tell them, we want this provision to be not one-sided. Pfizer will then tell us ‘no this is what we want.’ This is not a simple document which states that you want to import a medicine or vaccine that you have been using for ages. This is new.)

September 24
“After repeated reviews, Pfizer sent an email to DOH. I have been advised that the Office of the Executive Secretary that the DOH will be the signatory to CDA and requested a meeting,” he said.

In a media forum on Wednesday, Duque also mentioned this, explaining that the DOST was supposed to be the signatory for the CDA for COVID-19 vaccines.

September 25
“We responded to the Philippine government’s side to first have an alignment meeting with Pfizer since Pfizer is requesting initially for the executive secretary to sign the CDA when DOH has been previously assigned to sign (in behalf of the national government,” said Duque.

“Eh hindi pala ako pwede to sign for the national government. I can only sign for the DOH. That is why it is small wonder that DOST also signed in November a separate CDA with Pfizer,” he added.

(Turns out, I can not sign for the national government. I can only sign for the DOH. That is why it is a small wonder that DOST also signed in November a separate CDA with Pfizer.)

He also added that even COVID-19 policy chief implementer and vaccine czar Carlito Galvez, Jr. signed another CDA  with Pfizer in November.

Duque signed the CDA on October 30, about three weeks after he received the advisory from the Office of Executive Secretary which assigns DOH to be the signatory for Pfizer’s CDA.

“Even if there were some provisions na feeling ko medyo a bit one-sided, but still iniisip ko nga kailangan natin bakuna so pirmahan ko na,” the health secretary concluded.

(Even if there were some provisions that I feel was a little bit one-sided, I was thinking that we need the vaccine so I signed it.)

What happened outside Duque’s timeline

October 7
On October 7, Senator Francis Tolentino has called on the DOST, DOH, and FDA to get their act together and cooperate for the smooth conduct of clinical trials for a potential COVID-19 vaccine.

However, Dela Peña denied having knowledge when he was asked of reports that COVID-19 vaccines are allegedly being distributed in the country, as well as if these vaccines underwent licensing procedures.

“This statement is as alarming as it is confusing. This begs the question: who is really in-charge of clinical trials on COVID-19 treatments in the country?”