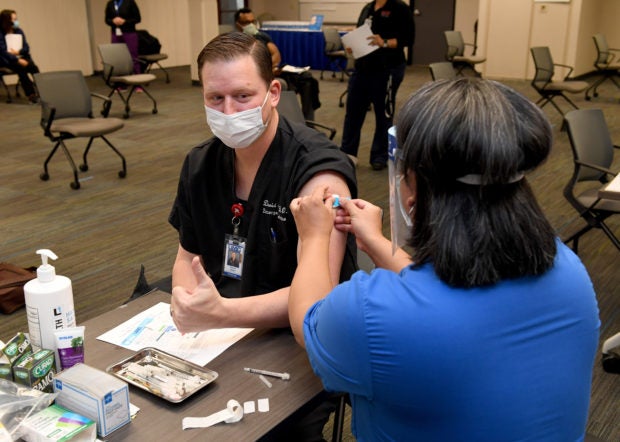 LAS VEGAS, NEVADA – DECEMBER 16: Dr. David Obert gives a thumbs-up after receiving a Pfizer-BioNTech COVID-19 vaccination at University Medical Center of Southern Nevada on December 16, 2020, in Las Vegas, Nevada. UMCSN received its first allotment of the vaccine on Monday and began vaccinating its front-line workers treating patients with COVID-19, including staff from the hospitals intensive care units and emergency department. The state has averaged 20 deaths from COVID-19 per day over the past two weeks. Ethan Miller/Getty Images/AFP

WASHINGTON  – Hungarian-born scientist Katalin Kariko’s obsession with researching a substance called mRNA to fight disease once cost her a faculty position at a prestigious US university, which dismissed the idea as a dead end.

Now, her pioneering work — which paved the way for the Pfizer and Moderna COVID-19 vaccines — could be what saves the world from a 100-year pandemic.

“This is just kind of unbelievable,” she told AFP in a video call from her home in Philadelphia, adding she was unused to the attention after toiling for years in obscurity.

It shows why “it’s important science should be supported on many levels.”

Kariko, 65, spent much of the 1990s writing grant applications to fund her investigations into “messenger ribonucleic acid” — genetic molecules that tell cells what proteins to make, essential to keeping our bodies alive and healthy.

She believed mRNA held the key to treating diseases where having more of the right kind of protein can help — like repairing the brain after a stroke.

But the University of Pennsylvania, where Kariko was on track for a professorship, decided to pull the plug after the grant rejections piled up.

“I was up for promotion, and then they just demoted me and expected that I would walk out the door,” she said.

Kariko didn’t yet have a green card and needed a job to renew her visa. She also knew she wouldn’t be able to put her daughter through college without the hefty staff discount.

She decided to persist as a lower-rung researcher, scraping by on a meager salary.

It was a low point in her life and career, but “I just thought…you know, the (lab) bench is here, I just have to do better experiments,” she said.

The experience shaped her philosophy for dealing with adversity in every aspect of life.

“Think through and then at the end of it, you have to say ‘What can I do?’

“Because then you don’t waste your life.”

The determination runs in the family — her daughter Susan Francia did go to Penn, where she earned a Master’s degree, and won gold medals with the US Olympic rowing team in 2008 and 2012.

Inside the body, mRNA delivers to cells the instructions stored in DNA, the molecules that carry all our genetic code.

By the late 1980s, much of the scientific community was focused on using DNA to deliver gene therapy, but Kariko believed that mRNA was also promising since most diseases are not hereditary and don’t need solutions that permanently alter our genetics.

First though, she had to overcome a major problem: in animal experiments, synthetic mRNA was causing a massive inflammatory response as the immune system sensed an invader and rushed to fight it.

Kariko, together with her main collaborator Drew Weissman, discovered that one of the four building blocks of the synthetic mRNA was at fault — and they could overcome the problem by swapping it out with a modified version.

They published a paper on the breakthrough in 2005. Then, in 2015, they found a new way to deliver mRNA into mice, using a fatty coating called “lipid nanoparticles” that prevent the mRNA from degrading, and help place it inside the right part of cells.

Both these innovations were key to the Covid-19 vaccines developed by Pfizer and its German partner BioNTech, where Kariko is now a senior vice president, as well as the shots produced by Moderna.

Both work by giving human cells the instructions to make a surface protein of the coronavirus, which simulates an infection and trains the immune system for when it encounters the real virus.

The mRNA quickly degrades and the instructions it gives the body aren’t permanent, making the technology an ideal platform for a variety of applications, said Kariko.

These could range from new vaccines for influenza, faster to develop and more effective than the current generation, to new disease treatments.

For example, AstraZeneca is currently working on an mRNA treatment for heart failure patients, which delivers signaling proteins that stimulate the production of new blood vessels.

Though she does not want to make too much of it, as a foreign-born woman in a male-dominated field, she occasionally felt under-estimated — saying people would approach after lectures and ask “Who’s your supervisor?”

“They were always thinking, ‘That woman with the accent, there must be somebody behind her who is smarter or something,'” she said.

Now, should everything go well with the Pfizer and Moderna vaccines, it is not hard to imagine the Nobel Prize committee rewarding Kariko and fellow mRNA researchers.

That would be bittersweet for Kariko, whose late mother would call her every year after the announcements to ask why she hadn’t been chosen.

“‘I never in my life get (federal) grants, I am nobody, not even faculty'” she would laugh. To which her mother would reply: “But you work so hard!”