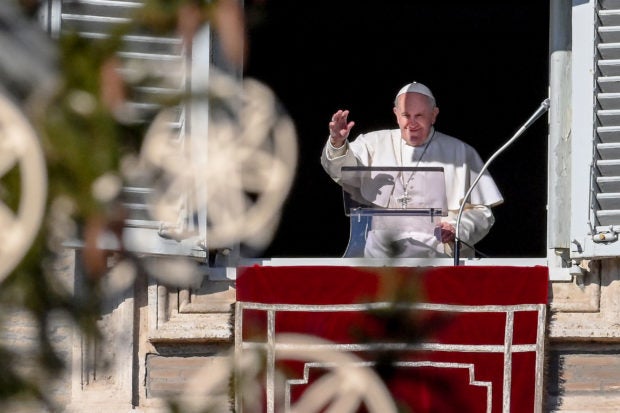 Pope Francis waves to worshippers from the window of the apostolic palace overlooking St. Peter’s Square during the weekly Angelus prayer on December 13, 2020 in The Vatican. (Photo by Vincenzo PINTO / AFP)

BUENOS AIRES, Argentina  – Pope Francis, an avid supporter of Argentine football team San Lorenzo, has committed a cardinal sin by becoming a member of a rival club, although it’s for a good cause.

Despite his passionate support for San Lorenzo, the Pontiff has accepted club membership from Buenos Aires giants Boca Juniors, with a personalized jersey set to follow.

“I’m proud to know that Pope Francis already has his Boca membership card and will receive the jersey with his signature,” said Boca president Jorge Ameal on Twitter.

Ameal posted pictures of the moment Francis received his membership card at the Vatican, as well as the presentation of a Boca jersey in Buenos Aires with his name and the number one on the back that will be given to the Pontiff.

The presentation was part of an educational partnership between Boca and the “Scholas Occurentes” network of education centers supported by the Vatican.

It was set up in Buenos Aires by Francis when he was the Roman Catholic archbishop in the Argentine capital. It is now present in 190 countries and brings together 400,000 education centers patronized by the Vatican.

Francis, who turns 84 on Thursday, was born in Buenos Aires, where a person can change anything except their football team.

He grew up supporting San Lorenzo and used to go to the stadium to watch matches with his mother, while his father played for the club’s basketball team.

In 2014, after San Lorenzo won the prestigious Copa Libertadores — South America’s equivalent of the Champions League — for the first time, the team traveled to the Vatican to present the trophy to their most famous supporter.

While San Lorenzo and Boca are not mortal enemies, as the former’s main rivals are Huracan while the latter share greater animosity with River Plate, it is still unheard of for an Argentine to pin their colors to two teams from the same city.