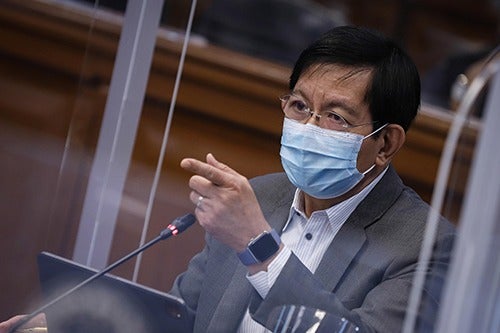 MANILA, Philippines — Senator Panfilo Lacson has advised Malacañang to start with the “dubious” appropriations under the the Department of Public Works and Highways (DPWH) in reviewing the proposed 2021 national budget.

“It is clear that questionable items such as double and overlapping appropriations should be vetoed, along with at least 793 line items for multi-purpose buildings with a uniform P1-million appropriation each,” Lacson said in an interview on dzRH Thursday evening.

Congress ratified the final version of the P4.5-trillion national budget for 2021 on Wednesday.

Lacson, prior to the budget bill’s ratification in the Senate, questioned the P28 billion increase in the budget of the DPWH under the bicameral conference committee report of Congress despite the agency’s “track record of underspending and questionable, wasteful projects.”

Before this, the senator had recommended that P63 billion be slashed from DPWH’s proposed budget.

Lacson, in a separate statement on Friday, said he is willing to help Malacañang review the budget by pointing out items for President Rodrigo Duterte’s potential veto.

According to the senator, he plans to send a letter to Malacañang to help them identify “questionable” appropriations under the DPWH budget.

“I am thinking of writing Malacañang to point out or at least assist them to identify excessive augmentations, realignments and unconscionable or unreasonable deduction,” Lacson told reporters in a later online interview.

(We can’t do anything about the items with reduced funding because the President can only veto items. He can’t realign funds. What he can do is veto the P28 billion plus or even more than that. I think even the leadership of DPWH would agree that they can’t absorb that much funds.)

In seeking the veto of the appropriations he earlier flagged, Lacson cited the chief executive’s previous veto of some P95 billion in items in the 2019 budget after senators raised concerns over the “abuse and indiscretions by some legislators in inserting pork into the spending bill.”

“This is with the aim of helping those involved in the review at least take a closer look at projects that should be scrutinized and even vetoed,” Lacson said.

“In turn, this will make sure not a single centavo in the 2021 budget will go to wasteful projects,” he added.