All is not calm: Nativity mural with pols’ images draws flak | Inquirer News

All is not calm: Nativity mural with pols’ images draws flak 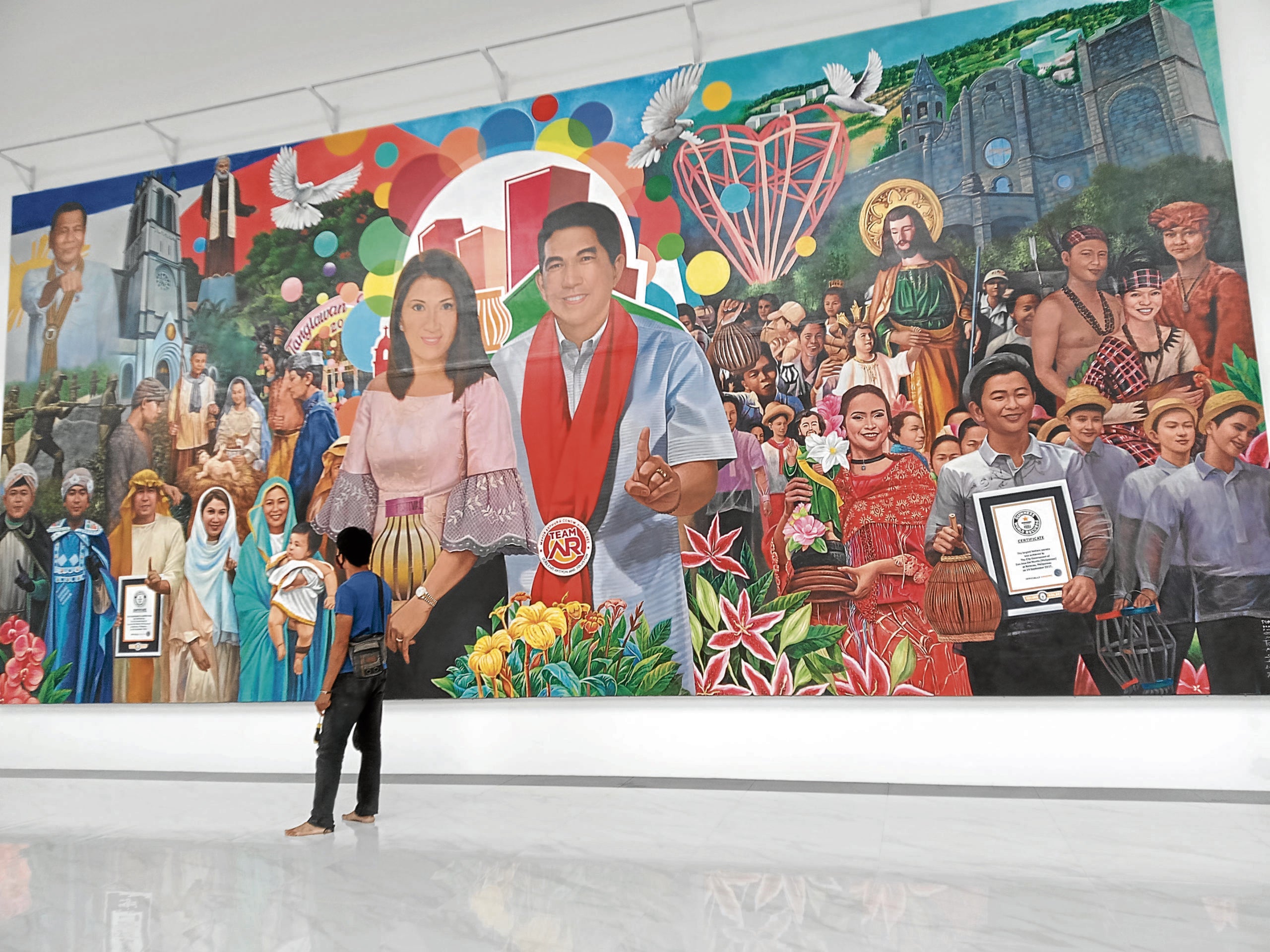 PROMO MURAL Netizens have found as “shameful self-promotion” the images of local government officials as biblical characters in a mural depicting the Nativity at the convention center of San Jose del Monte City in Bulacan province. The city information officer says the artwork was made in recognition of the city’s Guinness World Record for having the most number of living figures in a Nativity scene that was achieved during the Tanglawan Festival in 2019. —CARMELA REYES-ESTROPE

CITY OF SAN JOSE DEL MONTE — Even from afar, one cannot miss the blown-up images of Mayor Arthur Robes and his wife, Bulacan Rep. Florida “Rida” Robes, in a mural of the Nativity scene at the city’s newly inaugurated convention center.

The couple is depicted as shepherds, together with the images of other local officials painted as other biblical characters that include Mary and Joseph.

But what was intended to be a piece of art to celebrate a global recognition for the town drew backlash online after a photo of the mural was posted on Facebook on Tuesday.

The Robes couple posing by the mural with other local leaders, including representatives from the Catholic Church, quickly went viral, but the photo had to be taken down after it was heavily criticized.

Some netizens called it a “shameful self-promotion,” describing the couple as “epal,” a Filipino slang for “papel” or “pumapapel,” or one who always wants to present oneself in a situation.

Others asked if the money used to build the convention center came from the pockets of the local officials, who were also criticized for projecting themselves as “holy” or “saintly.”

The camp of the Robes couple defended the mural, saying it was the artist’s rendition of the reenactment of the Nativity in 2019 where more than 2,000 people participated.

That event, held during the Tanglawan Festival, won for San Jose del Monte the Guinness World Record in 2019 for having the “most number of living figures in a Nativity scene.”

In a statement, the city information officer, Ronald Soriano, said it represented “a major milestone for the city because it gave international recognition to the hard work and commitment to the faith of San Joseños, with the leadership of Rep. Rida and Mayor Arthur.”

A total of 2,101 residents joined the staging of the living Nativity, breaking the 2016 record held by the Calne Town Council and Bible Society in the United Kingdom with 1,254 participants.

According to Soriano, the painting, called “The Rising City Mural,” was intended to “depict the lives of San Joseños and it was not a religious piece of art.”

“[The mural] is a visual representation of the two Guinness World Records awarded to the city government (the largest lantern parade and the most living figures in a Nativity scene), placing the city [on] the world map,” he said.

He added: “The mural also illustrates St. Joseph as the patron saint of San Joseños, St. Padre Pio, various local churches, and the Rising Heart that strengthens the faith and resiliency of San Joseños.”

Fr. Arvin Ray Jimenez, assistant priest of St. Joseph the Worker Parish here, also defended the Robes couple and the mural, saying the artwork was meant to “remind the public of the Guinness event in the city last year.”

Fr. Barry Mercado of Sagrada Familia Parish Church here said the images could be interpreted in different ways. “It depends on how people would want to look at it,” he said.

Mercado has been organizing the annual procession of Nativity-themed “carrozas” (floats) in the City of Malolos since 2015. —WITH A REPORT FROM NESTOR CORRALES

Read Next
What NLEX operator will do to ease traffic
EDITORS' PICK
vivo gives users more reasons to claim #MemoryIsPriceless
Luzon folk flee as LGUs raise alert for Karding
Okada Manila is truly back to business as usual
House energy committee chair Arroyo bats for cheap electricity
Chinese-Filipino group backs ban on POGOs
Luzon, Metro Manila bear brunt of Karding’s impact
MOST READ
#WalangPasok: Suspended classes due to habagat, September 20, 2022
LOOK: Erika Rae Poturnak, Kobe Paras kiss and cuddle in her birthday greeting to him
Classes suspended in some areas in Luzon due to ‘habagat’
LPA may form east of Luzon, says Pagasa
Don't miss out on the latest news and information.