What NLEX operator will do to ease traffic 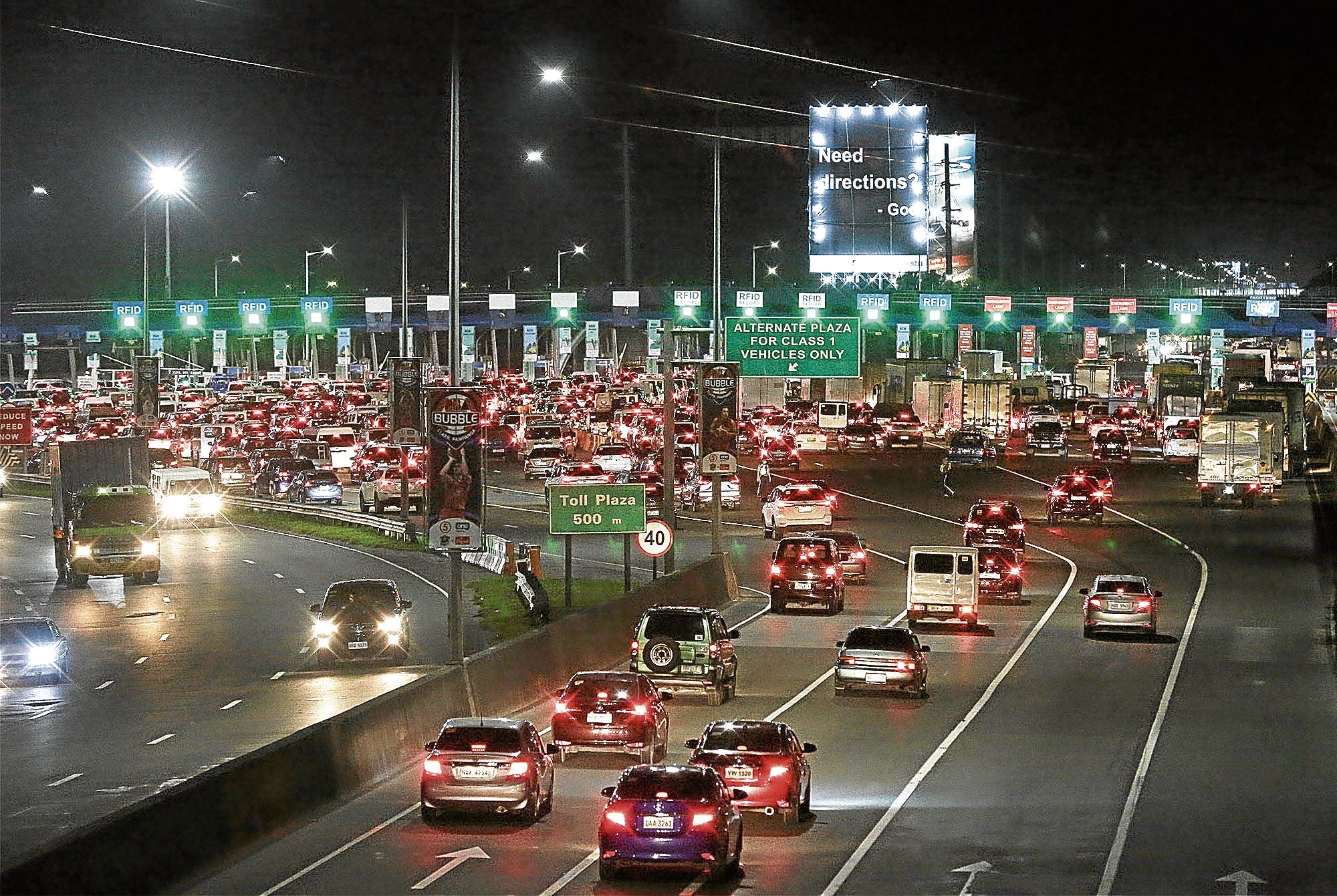 ‘ILL-STUDIED’ Congestion builds up at the gates of the North Luzon Expressway toll plaza in Bocaue, Bulacan, as faulty sensors fail to read vehicles’ radio frequency identification tags. Sen. Grace Poe wants the Department of Transportation to explain the “lamentable” experience of motorists with its “ill-studied” order for a shift to electronic toll collection. —RICHARD A. REYES

MANILA, Philippines — The operator of the North Luzon Expressway (NLEx) on Thursday said it would immediately relocate radio frequency identification (RFID) sticker installation and reloading sites at toll plazas in Valenzuela City to ease congestion on the turnpike.

NLEx Corp. announced its decision following a call from Malacañang for the company and the local government of Valenzuela City to settle their conflict over the monstrous tie-ups on the expressway caused by a mandatory shift from manual to electronic toll collection on tollways that began on Dec. 1.

Valenzuela Mayor Rex Gatchalian suspended NLEx Corp.’s business permit on Monday after the company failed to solve problems with its electronic toll collection system that caused snags at the toll gates. The city government then declared a “toll holiday” to allow vehicular traffic to go through the toll plazas unhindered. The kilometerslong tailbacks on the turnpike disappeared.

On Thursday, NLEx Corp. senior vice president Romulo Quimbo said the company would immediately relocate its RFID installation and reloading sites from the Karuhatan and Mindanao Avenue toll plazas to improve the flow of traffic there.

“From a traffic management point of view, you remove customers who have different reasons for being on the toll plazas,” Quimbo said.

He said NLEx Corp. promptly reimbursed more than 1,000 motorists who had been charged at the toll gates after Gatchalian had suspended the company’s business permit.

Quimbo said the error was due to a technical oversight.

He said the company was awaiting the city government’s response to its letter detailing proposed solutions to the problem.

Sales said the TRB asked NLEx Corp. to submit a recommendation for the reconfiguration of the Karuhatan and Mindanao Avenue toll plazas.

He said the board also told the toll operator to replace worn-out RFID tags and update its data transmission software.

Presidential spokesperson Harry Roque told a news briefing that Malacañang supported the TRB position that there should be changes at the toll plazas if traffic on the tollways should flow smoothly.

“The TRB, their position is that there’s really got to be changes. For our operators, they should replace their old and defective sensors so that the flow of vehicles would be smooth. There is a need to relocate, reposition RFID installation and reloading lanes. There is a need for maintenance, improvement, upgrade of their system software. There is a need for enhanced public traffic management and improved customer service assistance, among [other things],” Roque said.

He said the national government understood that local governments also exercised regulatory powers, but they should also be mindful of the interests of the tollway investors.

“We cannot deny the local government their jurisdiction to issue business permits because that is in accordance with the law—it’s in the Local Government Code—and the concept of local autonomy is part of our Constitution,” Roque said.

“But at the same time, they should also think about the need to balance [their actions] because projects like expressways were developed by private [investors]. Future investors might be turned off if this will happen often,” he added.

Sen. Grace Poe and Anakalusugan Rep. Michael Defensor on Thursday joined the call for the DOTr to suspend the implementation of electronic toll collection to protect motorists.

In a statement, Poe said she had filed a resolution for transportation officials led by Tugade to explain to the Senate the “lamentable” experience of motorists with the “ill-studied” DOTr order for the compulsory shift to electronic toll collection.

“We are asking the DOTr to suspend the full implementation of the 100-percent cashless transaction it compelled toll operators. The system isn’t completely ready,” Poe said.

Poe, chair of the Senate committee on public services, urged the DOTr to “revisit the order and suspend [it] to protect motorists.”

In the House of Representatives, Defensor said the implementation of electronic toll collection should be moved to March next year, and the tollway operators be allowed to import COVID-19 vaccines for their employees.

Defensor noted that the DOTr ordered the early introduction of the RFID system after toll collectors and other employees of the toll operators on NLEx and the South Luzon Expressway caught the coronavirus.

He said that if the operators were allowed to import vaccines for their employees, there would be no need to rush the implementation of electronic toll collection. In the meantime, he said the operators could fix the flaws in their electronic collection systems. —REPORTS FROM MIGUEL R. CAMUS, MARIEJO S. RAMOS, JEROME ANING, MELVIN GASCON, AND NESTOR CORRALES