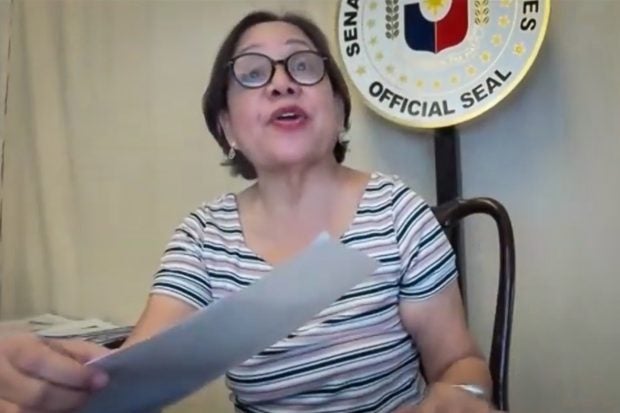 MANILA, Philippines — Senator Cynthia Villar said Thursday she is willing to provide equipment for bamboo processing if the Department of Environment and Natural Resources (DENR) would plan to propagate giant bamboo.

The Senate Committee on Environment, Natural Resources and Climate Change, which Villar chairs, was tackling Senate Resolution No. 581 that seeks discussion on the protection and conservation of the country’s forest cover and waterways when she made this remark.

“In that connection with the trees, bakit ayaw niyo ng bamboo, giant bamboo? Alam niyo bibigyan lang natin ng [equipment], and I am willing to give to all places ‘yung bamboo processing,” she asked Environment Secretary Roy Cimatu.

(In this connection with the trees, why do you not want to plant giant bamboo? You just need to provide equipment, and I am willing to provide the equipment that can be used for bamboo processing.)

(Just promise to me that you will plant giant bamboo, and to all the places where you plant it, I will provide equipment for bamboo processing. It is not expensive. In Las Piñas, we only spent P6 million to make the bamboo processing plant.)

In citing the importance of propagating bamboo, Villar noted that former President Gloria Macapagal-Arroyo has previously issued a presidential decree which mandates that the Department of Education should have 25 percent of school chairs be made of bamboo.

(So we will just provide processing equipment to those who plant bamboo in our protected areas and it will be their source of income.)

(What is good with bamboos is you don’t have to cut it at the roots so the roots can hold the wetlands and they regrow, unlike trees that die once you cut them.)

In response, Cimatu said he also prioritizes the planting of bamboo among DENR’s initiatives.

“My priority really is bamboo, and I would like to put that on record that the very big reason why we really need to increase the production of bamboo in our country is that while we have the national draining program, it is also the source of our lumber here in our country,” he said.

(I am putting serious attention to the propagation of bamboo. We will propagate giant bamboo and all kinds of bamboo.)