MANILA, Philippines — An executive of a high-end resort in Cebu has issued an apology amid public backlash over the management’s alleged poor treatment of a guest with special needs.

Manny Gonzalez, resident shareholder of Plantation Bay & Resort Spa, addressed his apology to the resort guest who posted a negative review of the establishment on a travel app about the “discrimination” that she and her son supposedly experienced while at the resort. 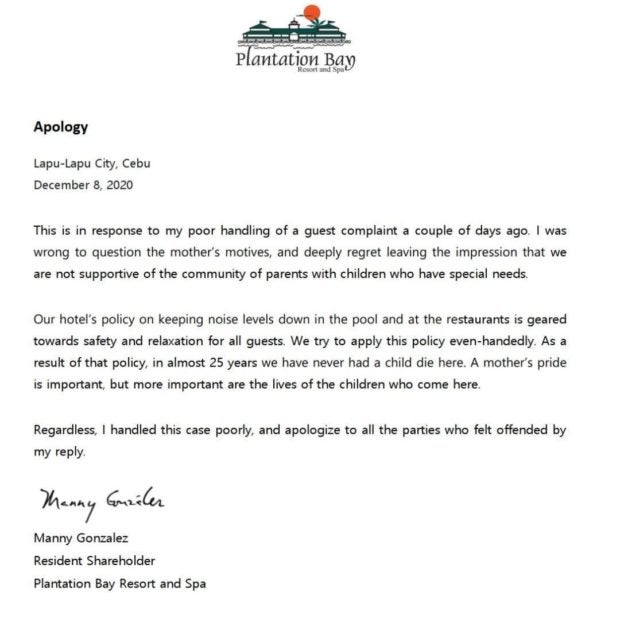 In his letter, Gonzalez’s apology referred to his “poor handling of a guest complaint.”

“I was wrong to question the mother’s motives, and deeply regret leaving the impression that we are not supportive of the community of parents with children who have special needs,” Gonzalez said in a statement posted Tuesday on the resort’s Facebook page.

“Our hotel’s policy on keeping noise levels down in the pool and at the restaurant is geared towards safety and relaxation for all guests. We try to apply this policy even-handedly. As a result of that policy, in almost 25 years we have never had a child die here. A mother’s pride is important, but more important are the lives of the children who come here,” he added.

The apology stemmed from Gonzalez’ earlier response to the guest’s complaint.

According to the guest identified as Mai Pages, she and her six-year-old son Fin were repeatedly told off by the staff to keep quiet while staying at the pool. Pages said she had explained that her son has autism that made him predisposed to having squeals of delight when he is happy or excited, but the staff supposedly continued to reprimand them.

“When something excites him or when he is happy, he makes it known by squealing in delight. I thought that was okay until we were told [off] from afar (a lifeguard),” she wrote on Trip Advisor’s website last December 6.

“As a mother, your initial action would be directed to your child. So I told him not to squeal because it wasn’t allowed. Quite frankly it was a difficult moment. Another lifeguard came and told us the same thing. I had to explain that he is a child with needs,” she added.

In responding to the travel review, Gonzalez pointed out that the resort follows strict policies against noise-making.

Gonzalez’s response soon drew flak as netizens pointed out his way of schooling the mother about autism. He even went as far as accusing her of lying about their experience.

“For your information, uncontrolled shouting is not a symptom of autism. On the contrary, autistic children tend to be silent, non-verbal, and overwhelmed and withdrawn when faced with strangers. Google ‘Autism’ and verify yourself,” he replied.

“[T]his parent is most likely deliberately lying, or has been given an incorrect diagnosis of autism, when what the child more likely have is a lack of discipline due to simple parental neglect,” he continued.

His response has made the rounds of social media, but has since been deleted.

Another part of his response that remained visible on the travel app further stated that: “Therefore this parent is trying to blame the resort for her own failure to look after her child’s interests. While we are sorry that we are not the right resort for this parent and child, we hope that in the future other parents who want their children to scream constantly and bother other guests, will do their homework and choose another resort, one which doesn’t care about the 99% of guests who want to relax in peace and quiet.”

According to the Centers for Disease Control and Prevention (CDC), Autism spectrum disorder (ASD) is a developmental disability that affects the person’s social, emotional, and communication skills.

The US-based public health institute acknowledged that some people with ASD might have issues with showing or talking about their feelings. Those who cannot or do not speak might also use language in unusual ways.

Contrary to Gonzalez’s claim, CDC explained that some people diagnosed with ASD might have unusual reactions to their surroundings. It clarified that people with ASD “do not have just social ‘difficulties’ like shyness.”

This means that not all ASD diagnosed individuals or children will react to changes in the way things sound, smell, taste, look or feel by just staying silent or withdrawn.

“A change in the normal pattern of the day—like a stop on the way home from school—can be very upsetting to people with ASD. They might “lose control” and have a “melt down” or tantrum, especially if in a strange place,” said CDC.

In addition, the National Institute of Mental Health (NIHM) said that not all people with ASD will exhibit similar symptoms.

“Not all people with ASD will show all behaviors, but most will show several,” NIHM said on its website.

Still a long way to go

The Autism Society of the Philippines recognized Gonzalez’s and the resort’s apology as “a significant first step.” However, the organization said the company should consider having disability sensitivity training.

“Plantation Bay Resort & Spa stands firm on their belief that there is NO ROOM for reasonable accommodation for the needs of individuals with developmental disabilities — even equating it with parental “pride.” All this, as the nation commemorates National Human Rights Consciousness Week,” the group said on a Facebook post.

The organization also hoped that the company will review its policies and processes following the Magna Carta of Persons with Disabilities.