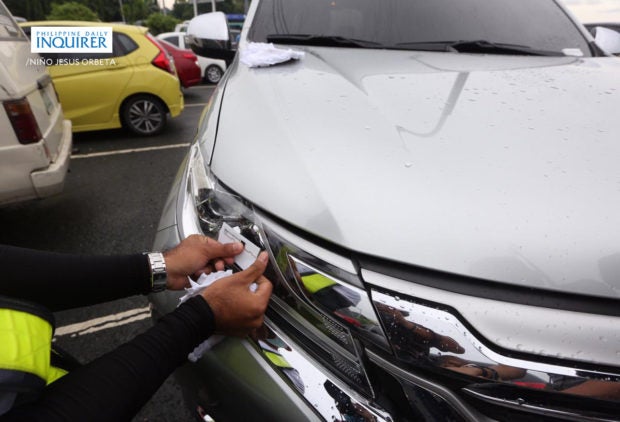 MANILA, Philippines — The management of the North Luzon Expressway (NLEX) Corp. said Tuesday that some of the radio-frequency identification (RFID) stickers being used at toll gates are defective, citing reports from motorists.

Metro Pacific Tollways Corp. (MPTC) chief communications officer Romulo Quimbo said this was among the concerns raised by the NLEX Corp. in its letter to Valenzuela City Mayor Rex Gatchalian on Monday. To recall, the city government earlier suspended the business permit of NLEX Corp. due to the heavy traffic that its cashless toll collection has been causing in the locality.

(One of the issues we raised in our letter yesterday is that there are defective RFID stickers. When we say defective, some are worn out, have wear and tear damage, or were not properly installed.)

(We saw in our records that some motorists have reported that the chip was lost in the stickers.)

Quimbo said the NLEX Corp. has a sticker replacement program for motorists with defective stickers.

(We get back to the customer. We go to the motorists. Most of them belong to companies, many are individuals. We also contact car owners with defective stickers to let them know that they should replace the stickers.)

He assured that appropriate measures are being undertaken to fix the glitch.

Read Next
Biden chooses retired general Lloyd Austin to be defense secretary — source
EDITORS' PICK
Isko Moreno bares ‘two-pronged’ approach to rehabilitate MSMEs
What’s at stake for every fighter at ONE: NextGen
Legarda emphasizes role of ICC/IPs in nation building this IP month
Climate Change Commission and Nestlé PH to discover sustainability-focused solutions
Gordon calls 2 Pharmally execs ‘Senate fugitives’ after no-show in probe
NCR’s COVID-9 alert level may be downgraded from 3 to 2 soon — DOH
MOST READ
Drivers with no traffic violations can now renew licenses for 10 years
LJ Reyes says Paolo Contis made ‘no efforts’ to talk to her after their split
Yang’s Princeton degree raises eyebrows among senators
Gordon to Duterte: You? Teaching me courtesy?
Don't miss out on the latest news and information.