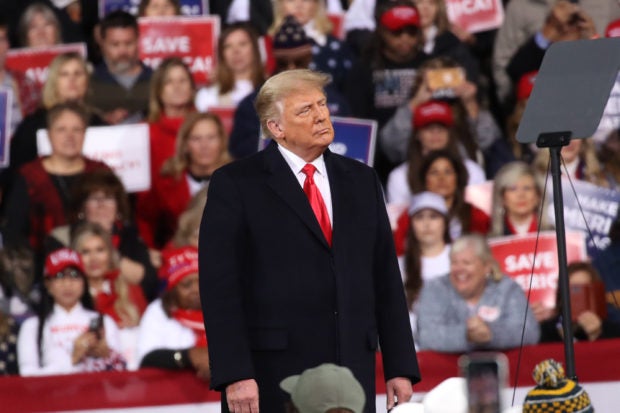 VALDOSTA, GEORGIA – DECEMBER 05: President Donald Trump attends a rally in support of Sen. David Perdue (R-GA) and Sen. Kelly Loeffler (R-GA) on December 05, 2020 in Valdosta, Georgia. The rally with the senators comes ahead of a crucial runoff election for Perdue and Loeffler on January 5th which will decide who controls the United States senate. Spencer Platt/Getty Images/AFP

VALDOSTA, Georgia – Donald Trump launched into another litany of baseless claims that the US presidential election was stolen from him at his first post-poll rally on Saturday, telling the crowd he would still end up winning.

“We’re winning this election,” Trump said at the rally in Valdosta, Georgia, adding later that “we will still win it.”

Despite surging cases of Covid-19 nationwide, few masks could be seen at the rally and many in the crowd were not abiding by social-distancing measures.

Trump was joined by first lady Melania Trump, who gave a short speech before the president’s.

The former reality show star was campaigning in Georgia on behalf of two Republican Senate candidates facing a hugely important runoff on January 5.

The runoff races will decide which party controls the US Senate, and Trump continued his fear-mongering about rival Democrats.

“The voters of Georgia will determine which party runs every committee, writes every piece of legislation, controls every single taxpayer dollar,” he said.

There had been concerns from some Republicans over whether Trump’s continuing claims of fraud would drive down voter turnout among Republicans in the upcoming election, making his appearance somewhat of a gamble.

Trump made clear he was neither ready to concede to Biden nor give up on his baseless claims of fraud dismissed by a long line of courts.

Biden won Georgia by just under 12,000 votes, becoming the first Democratic presidential candidate since Bill Clinton in 1992 to win the Republican stronghold.