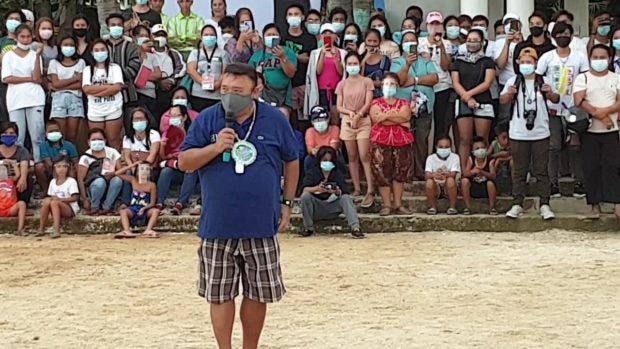 MANILA, Philippines — Presidential spokesperson Harry Roque, who recently came under fire after attending an event in Bantayan Island in Cebu where social distancing was not observed, said that he has learned his lesson.

Roque made the comment when asked about Interior Undersecretary Jonathan Malaya’s statement that the government officials should lead by example in following health protocols.

(That is right. That’s a lesson learned.)

(That’s why when we entered Palawan, pardon us, we demanded that everyone should observe social distancing.)

Roque recently attended the Suroy-Suroy public event in Bantayan Island as part of the government’s tourism campaign. However, a video of him while speaking to a packed crowd circulated on social media, drawing criticism for violating minimum health standards for failing to observe social distancing.

The Palace official claimed in a subsequent press briefing to having been taken aback by the huge crowd that attended the event, but assured that he observed physical distancing and had also reminded the attendees to observe minimum health standards.

Roque is no stranger to intrigue or allegations of violating health standards at the start of the pandemic.

In July, Roque was slammed for “living the life” with the dolphins of Subic while most people and stranded individuals hunkered endured government-imposed restrictions during the community quarantine.

Roque has since apologized for this side trip, saying he was an Authorized Persons Outside Residence (APOR) on his way to Bataan, and assured the public that he did not violate any health protocols, even when he was photographed talking with the park’s personnel without a protective mask.

Last November, while typhoon Ulysses was battering northern Luzon, a video of Roque singing a classic Eraserheads song without his face mask on before a crowd at a videoke joint in Baguio City, which has been considered by the OCTA Research as a coronavirus hotspot.

Interior Secretary Eduardo Año said a fact-finding probe will be conducted into the event attended by Roque, along with the aid distribution of Senator Manny Pacquiao where health protocols were also supposedly violated.