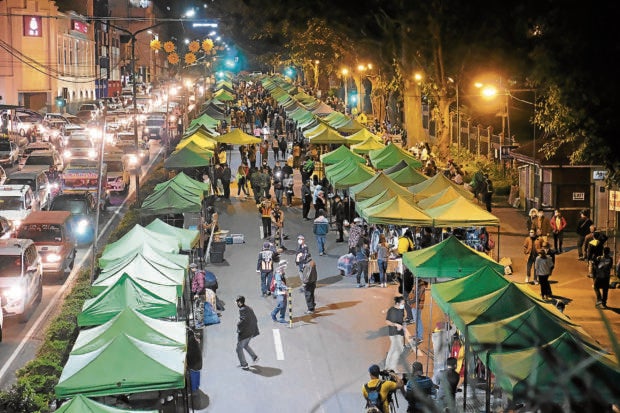 BARGAIN HUNTING A stretch of Harrison Road comes to life on Dec. 1 as the Baguio City government revives the “night market” near Burnham Park. City officials, however, immediately shut the pop-up market, which draws people looking for cheap clothes, shoes and accessories, after it was criticized for lapses in crowd control. —NEIL CLARK ONGCHANGCO/CONTRIBUTOR

BAGUIO CITY, —Mayor Benjamin Magalong on Wednesday admitted that the physical distancing rule was ignored during the lighting on Tuesday night of the giant Christmas tree, an annual event here that officially opened the yuletide season.

Although policemen were sent to ensure that health protocols were followed, the crowd of 1,500 people who went to upper Session Road to watch the tree lighting struggled to avoid standing close to each other.

“Most probably, some people will be hitting us because one way or another, some of us failed to observe social distancing during this event,” Magalong said. “One thing that I can assure you … I am taking full responsibility for what happened tonight.”

Images of the gathering had circulated online and were criticized for the apparent violation of the physical distancing rule.

“If there’s someone who is at fault here, blame me. It’s your mayor’s fault. Don’t fret,” said Magalong, who also serves as the government contact tracing czar.

He said the event and the succeeding activities to celebrate Christmas were meant to be “safe and healthy.”

Hours after the lighting ceremony, the city reopened the night market, a crowd drawer, on Harrison Street. But Magalong again suspended its operation on Wednesday, citing the “apparent lapses in crowd control.”

He ordered an assessment of the night market’s reopening following observations that health protocols were sacrificed. 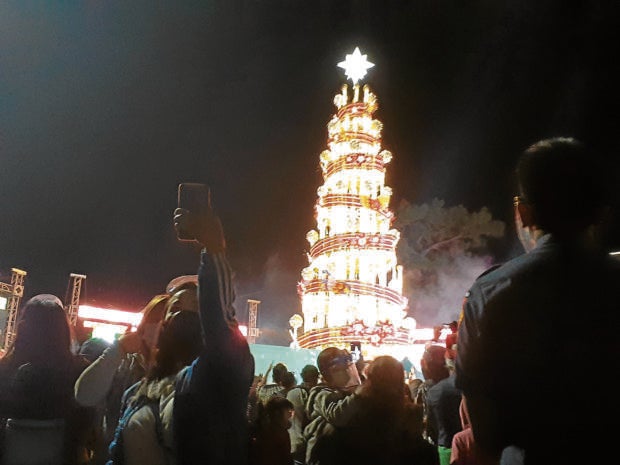 “We must strike a balance between reopening the economy and safeguarding the health and safety of the people. This is our new normal direction,” Magalong said in a statement.

A University of the Philippines Baguio mathematics professor has cautioned against mass gatherings, saying virus carriers who have no symptoms could have joined these crowds.

“In late October until the first week of November, 56 percent [of carriers] were asymptomatic—no colds, no sniffles, just normal. So the carrier wouldn’t know he or she is infectious [if that person] went to a crowded area,” said Rizavel Addawe, who led a team that analyzed the behavior of the coronavirus in Baguio.

The city breached the 3,000-mark on Monday and most of the new cases were found after contract tracing was done in several villages.

At present, the active cases that were isolated and undergoing treatment totaled 181. Despite the 3,029 patients since March, the rate of cases has slowed down based on health data.