Campaign to save Taytay town hall goes to court 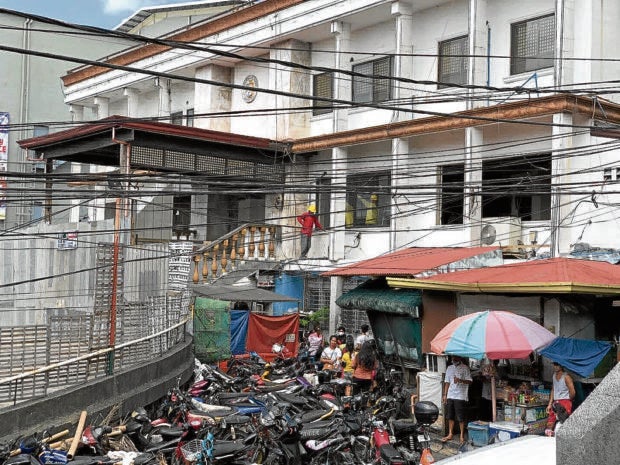 TEARDOWN The demolition of the old municipal hall of Taytay town in Rizal province continues as heritage advocates explore the legal route to preserve the 60-year-old building. —JOHN TOBIT CRUZ/CONTRIBUTOR

Heritage advocates have asked a court in Antipolo City to stop officials of Taytay town in Rizal province and a private contractor from demolishing the old municipal building to give way to a new public hospital.

In a 20-page complaint filed in the Antipolo City Regional Trial Court (RTC) on Nov. 28, nine private citizens and former and incumbent local officials sought to annul Municipal Board Resolutions No. 74 and 84, both passed in October 2019, “designating the property [as the] site for the construction of the Rizal Provincial Hospital System Taytay Annex.”

The property, covered by two tax declarations in Barangay Dolores, is the site of the old municipal hall, which was restored between 2014 and 2016, and renamed “Taytay Ancestral Home.”

The petitioners asked the court to issue a temporary restraining order and a preliminary injunction against the demolition of the 60-year-old structure, which they claimed had cultural value.

John Tobit Cruz, a village councilman of Sta. Ana in Taytay and one of the petitioners, said on Wednesday that the municipal government also violated the Local Government Code when it failed to hold a public consultation on the demolition.

In a statement written in Filipino, the municipal government stressed that it “very much respects the culture, history, heritage and heroism of Taytay residents.”

But it said the old municipal building could not be considered a local cultural property anymore after “too many modifications” were done on its original structure by the previous mayor.

It said the 245-bed hospital, to be built with funds from the Rizal provincial government, “serves a higher purpose” by providing health-care services in an accessible and flood-free location.

In a text message on Wednesday, Mark Valdez, municipal information officer, said it was the provincial government that chose the new hospital’s location out of three proposed sites, and it should be the one to hold a consultation.

The other sites proposed by the municipal government were a public park and a government lot in Barangay Muzon.

Taytay Advocates of Cultural Heritage, a group of local conservation advocates, said the demolition started on Nov. 20 with portions of the roof, interior walls and floor of the two-story building already taken out.

The complainants asked the contractor to provide an inventory of the items it had removed, like the original staircase and chandeliers, Cruz said.

Police Maj. Rodel Ban-o, Taytay police chief, said he had asked the municipal engineer to defer the demolition of the building’s basement, where a police jail holds 250 detainees.

Ban-o also asked the engineer to keep the power supply on until such time that the detainees were transferred to a new building near the town’s Barkadahan Bridge.