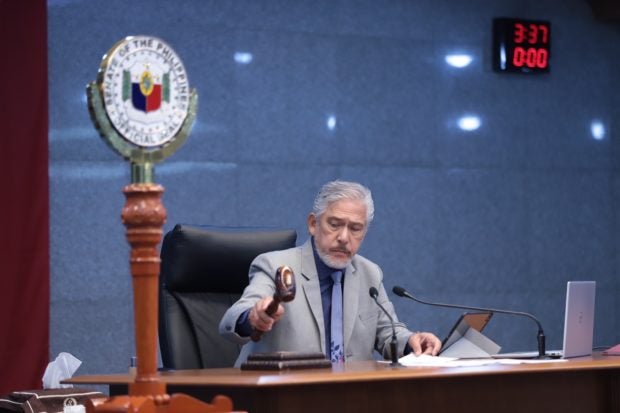 MANILA, Philippines — Senate President Vicente Sotto III opposed Sunday an alleged bid to allow the Commission on Elections (Comelec) to waive safeguards in the procurement of equipment and materials for automated elections.

On Twitter, election lawyer Emil Marañon said “someone at the Senate” was attempting to insert a provision in the 2021 national budget giving Comelec authority to disregard all the requirements and safeguards in Section 12 of the Automated Election Law.

Section 12 of the law deals with the procurement of election equipment and materials, including safeguards such as that “the system procured must have demonstrated capability and been successfully used in a prior electoral exercise here or abroad.”

Sotto replied to Marañon’s tweet saying that he had started to look into the allegations.

The Senate President likewise said that the proposal would be easy to shoot down.

For 2021, the Comelec has a proposed budget of P14.56-billion to be used for renting vote-counting machines (VCMs) and printing and distribution of supplies for the 2022 presidential elections.

ADVERTISEMENT
Read Next
Suicide car bomb kills 30 Afghan security personnel
EDITORS' PICK
PNP’s Covid-19 cases jump to 9,809; 52 new infections logged
Pope Francis to miss events due to new flare up of leg pain—Vatican
New Year, New Rediscoveries
More than 150 National Guard in Washington for Biden inauguration test positive for coronavirus
Is your company a growth champion? Stand up and be recognized!
Acer Philippines welcomes you to its first flagship store
MOST READ
AFP to apologize to UP alum falsely included in list of NPA members — Lorenzana
Dustin Poirier knocks out Conor McGregor at UFC 257
Former US envoy to PH Sung Kim appointed to State Department
Ellen DeGeneres, too, is baffled by viral Filipino soda ad
Don't miss out on the latest news and information.