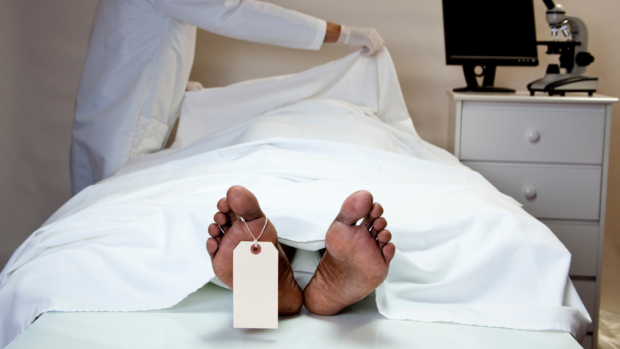 A 32-year-old man who was mistakenly declared dead suddenly “resurrected” while he was on an embalming table.

Peter Kigen ended up in the morgue after a blunder in a hospital in Kenya, East Africa, where he was rushed after fainting in his home on Nov. 24.

“Kigen had been suffering from a stomach ailment which forced us to rush him to hospital,” his uncle told Citizen TV the day after.

Upon arriving at the center, Kigen’s younger brother Kevin Kipkurui said a doctor attended to Kigen. The doctor then asked Kipkurui to register his older sibling’s details, as per The Standard on Nov. 26.

When Kipkurui returned from filling up the necessary documents, a nurse told him that Kigen had already died.

“The nurse later handed me a document to take to the mortuary attendant before my brother’s body was moved to the morgue,” the younger sibling said.

However, the incident eventually took a bizarre turn a few hours later. An attendant had already made a cut in Kigen’s right leg for the formalin when he suddenly woke up screaming in pain, as per report.

The incident shocked the employee and others nearby, who thought that Kigen had “resurrected” from the dead. Upon being informed, Kigen’s family “could not understand how they could move a person who is still alive into the mortuary.”

Following the odd turn of events, Kigen is currently recovering in the hospital. Meanwhile, his family has accused the hospital of negligence.

“I cannot believe what just happened. How did they establish that I was dead?” Kigen stated as he recalled the events.

“I did not even know where I was when I regained consciousness, but I thank God for sparing my life,” he said in the report. “I will serve Him for the rest of my life.”

Though the family is blaming the hospital for the mishap, one of the doctors insisted that this was not the case. Dr. Gilbert Cheruiyot explained that Kigen’s relatives first presumed he was dead and “did not even wait for certification of death.” He also said that they moved him to the morgue on their own.

Dr. Cheruiyot then advised the public to follow proper regulations when rushing a loved one to a hospital. Ryan Arcadio /ra

Read Next
UK testing error wrongly tells 1,300 people they have coronavirus
EDITORS' PICK
Acer Philippines welcomes you to its first flagship store
New Year, New Rediscoveries
Is your company a growth champion? Stand up and be recognized!
PNP’s Covid-19 cases jump to 9,809; 52 new infections logged
Pope Francis to miss events due to new flare up of leg pain—Vatican
More than 150 National Guard in Washington for Biden inauguration test positive for coronavirus
MOST READ
Ellen DeGeneres, too, is baffled by viral Filipino soda ad
Former US envoy to PH Sung Kim appointed to State Department
WATCH: Alex Gonzaga joined by family in Amanpulo honeymoon
UP frat condemns red-tagging after denouncing abrogation of DND agreement
Don't miss out on the latest news and information.