MANILA, Philippines — Vice President Leni Robredo has refuted assertions that it is the liberal and democratic worldview’s unfulfilled promises that gave rise to populist and even hardline right-wing leaderships today.

Speaking during the 13th Council of Asian Liberals and Democrats (CALD) General Assembly held Friday, Robredo cited a narrative being spread that the failure of liberal governance to attend to the concerns that it should have solved led people to lean towards authoritarian regimes.

“The past few years, we have seen ideas we hold dear under attack, with populist-authoritarians the world over tapping into long-simmering frustrations, capturing office through the same participative mechanisms that form the bedrock of our beliefs,” Robredo said.

“The main message, it seems, has to do with a world order that has failed to deliver in its promises.  The diagnoses and prescriptions may be different, but the main thesis is that this world order — liberal and democratic in its processes — has given rise to new dangers, bred widespread inequality, and allowed the powerful few to hoard vast riches while leaving everyone on the dust,” she added.

The Vice President — a leader of the country’s Liberal Party (LP) that is often labeled as a center-left organization — also mentioned that the common stereotyping of liberals is that they are elite and educated, and are out of touch with the world’s problems.

Such claims, according to her, are “untrue.”

“This powerful few, this elite—educated, technocratic, politically correct; a lot of times, liberal, and a lot of times, out of touch—is to blame for much that is wrong in the world. Or so the assertion goes,” she elaborated.

“We, of course, armed with our good intentions and long think pieces about how liberal democracy has been the key to human progress over the past couple of centuries, dismiss these assertions as untrue,” she added.

Robredo’s remarks come four years after LP presidential bet and her running-mate, former Senator Mar Roxas, lost to eventual winner President Rodrigo Duterte by a considerable margin.  Robredo won, albeit by a slender margin of less than 300,000, over a dictator’s scion, former Senator Bongbong Marcos, in the vice presidential race. Marcos has since lodged a poll protest against Robredo’s victory in 2016. 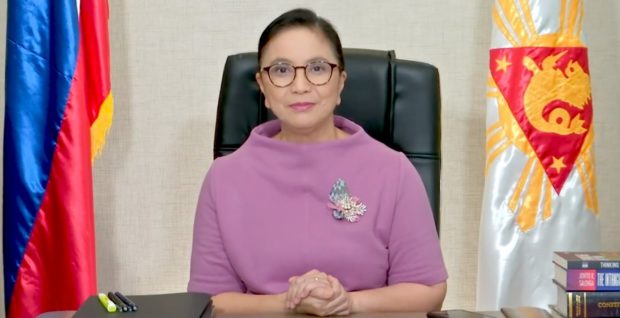 But many observers have noted that the 2016 elections showed that the public perception about the liberals — whose mindsets are represented by LP, at least, in the Philippines — have tipped towards their political opponents.

Duterte has long labeled himself as a socialist leader, but legitimate leftist organizations in the country have dismissed his government as an authoritarian regime.

READ: Duterte: I’m a socialist, not a communist; last card

READ: Duterte slams Joma anew: How can I not be socialist?

The Marcoses have long been seen as the political opponents of the liberals, especially as LP rallied behind former president Corazon Aquino – wife of former Senator Benigno Aquino Jr., a fierce political foe of her predecessor, late strongman Ferdinand Marcos; and mother of Duterte’s predecessor, former President Benigno “Noynoy” Aquino.

The rise in popularity of Duterte’s brand of governance is also often attributed to the alleged failure of Noynoy Aquino’s administration to address certain problems and issues during his term.

Even surveys point to high trust and approval ratings for Duterte and other allied officials. Robredo, on the other hand, manages to get a hight rating, too – but not as high as the trendy Duterte.

Despite her rebuttal, Robredo nevertheless acknowledged that there are issues that liberals need to focus on as well as stories to listen to in order to give people a sense that their problems are being heard and addressed by the country’s liberal leaders, no matter their differences.

“Look deeper and we come face to face with the very real frustrations that have fueled the illiberal phenomenon. We come face to face with the farmer who has tilled his land for decades, only to be swallowed by a megacorporation. We see those same corporations co-opting our own liberal rhetoric about freedom from regulation, stockpiling wealth while their workers barely get by,” she noted.

“These faces, these stories, are much more than mere samples from a data set that we use to come up with our technocratic solutions. They are the lifeblood that runs through those very solutions: Without listening to their stories […] will never get off the ground. Conversely: The more that the people are looped in—the more they recognize that we are all in this together—then the more galvanized they become,” she added.