Duterte: I’m a socialist, not a communist; last card 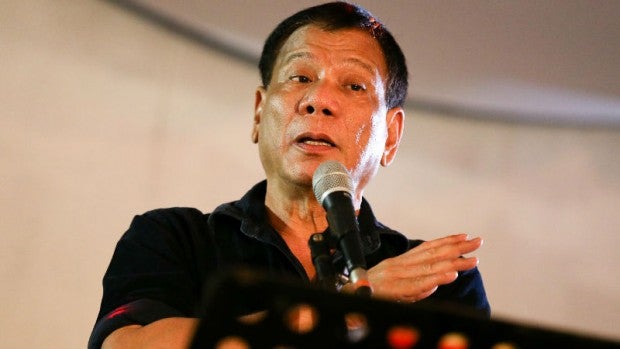 SAN PEDRO CITY—Presidential candidate and Davao City Mayor Rodrigo Duterte, who has been criticized for “coddling and supporting” the New People’s Army (NPA), said he was not a communist but a “socialist.”

“Ako, sosyalista. Hindi ako komunista. Kaming mga sosyalista, para kami sa tao (I am a socialist, not a communist. We socialists are for the people),” Duterte said at a campaign rally here on Friday night.

Promising to end corruption, and the problems of illegal drugs, criminality and poverty, he also described himself as the country’s “last card.”

“At the end of the day, makita ninyo, ako ang huling baraha ng Pilipino (You’ll see, I am the Filipinos’ last card),” he said.

Duterte was apparently responding to criticism by rival candidate Mar Roxas of the Liberal Party who assailed the Davao mayor for “coddling and supporting” NPA rebels,  who forms the armed wing of the Communist Party of the Philippines, by giving in to the insurgents’ demand for “revolutionary taxes” in Mindanao.

Duterte was also scored  for his alleged involvement in the Davao Death Squad, a shadowy gang of assassins said to be responsible for the killing of small-time criminals, including minors and journalists, in his city.

Duterte did not explain the difference between a communist and a socialist.  Political texts commonly describe socialism as a lower stage of communism, which envisions an egalitarian or classless society and communal ownership of the means of production.  Inasmuch as a division of classes may still exist, socialists propose state-owned production enterprises.

In his speech, however, Duterte said his economic program would be to take steps to expand the middle class by expanding credit for small businesses.

He said he would not focus on big infrastructure projects but begin with basic social services.

“Wala muna akong bridge (We won’t have bridges in the meantime),” Duterte said, adding that government infrastructure projects were a source of corruption.

Should he be elected, Duterte said his administration would  give each region P1 billion to be used “not for consumption” but as start-up money for small businesses. He  reiterated his plan to end contractualization of the working class.

Duterte also vowed to double the salaries of rank-and-file police personnel, which is currently around P14,000, and expand the Pantawid Pamilyang Pilipino Program, the government’s conditional cash transfer program for the poor, by giving each family on the list a sack of rice.

“Ang pag-asa natin (our hope) is to raise the middle class,” Duterte said.

Duterte, who served as Davao City mayor for 22 years, said his programs would not be “grandiose, (but) I will try to build a strong middle class if you want a nation that is progressive.”

“At the end of the day, makita ninyo, ako ang huling baraha ng Pilipino (You’ll see, I am the Filipinos’ last card),” he said.