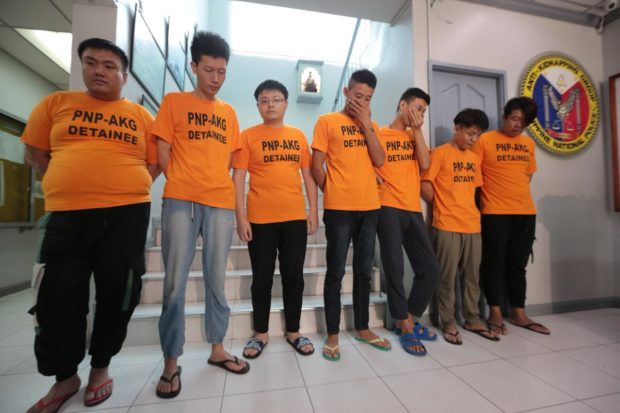 In this September 2019 photo, the Philippine National Police-Anti-Kidnapping Group (PNP-AKG) presents to members of the media in Camp Crame, Quezon City, six Chinese and a Taiwanese national who were arrested by the PNP aviation security group for kidnapping and illegal detention of fellow Chinese nationals working in POGOs. INQUIRER FILE / GRIG C. MONTEGRANDE

Data from the Philippine National Police-Anti-Kidnapping Group (PNP-AKG) have shown that kidnapping incidents related to offshore gaming operations became rampant in 2019. It also showed that while it had no case of casino-related kidnapping in 2016, it recorded a total of 24 incidents in 2017 and 2018, 35 in 2019, and two in 2020.

The Bureau of Immigration (BI) started issuing VUA to qualified Chinese in 2017.

According to PNP-AKG spokesperson Maj. Ronaldo Lumactod, the police unit has not recorded any POGO-related kidnapping from 2016 to 2018. He said PNP-AKG only started receiving reports on kidnapping cases related to POGO operations last year.

PNP-AKG reported that it arrested 34 suspects in nine incidents of POGO-related kidnapping in 2019, and 31 more in 15 cases this year. PNP-AKG said all 65 arrested suspects, 52 of whom are Chinese, victimized POGO workers.

Other kidnapping suspects were Indonesians, Malaysians, Taiwanese, and Filipino-Chinese, according to PNP-AKG.

The program is open to Chinese who are members of tour groups organized by the Department of Tourism-accredited tour operators; businessmen endorsed by local and foreign chambers of commerce and other government agencies; and athletes and delegates to conventions and exhibitions.

At that time, BI Commissioner Jaime Morente said the scheme aims to “facilitate the expeditious entry and admission of Chinese nationals into the country and thus attract more tourists and investors from China.”

But it seems the issuance of VUA also caused unfavorable results because according to Lumactod, the rush of Chinese tourists in the country due to the program ushered in the kidnapping of POGO stakeholders.

(The problem that happened is when the DOJ and Immigration started the system on issuing visas upon arrival. When the VUA system was implemented, Chinese, Taiwanese, Malaysian, and Indonesian nationals were allowed to come here in the Philippines without using visa. They will only be issued a visa upon arrival in the Philippines.)

He also said that when the government started to deal with the issue on VUA, it is already “too late” because there were already a lot of foreign nationals who have arrived in the country by then.

Lumactod explained Chinese and other foreign nationals were still “regrouping” when the VUA system was launched that’s why POGO-related kidnapping only started to occur in 2019. He also noted that in 2019, the number of Chinese and Taiwanese who have arrived in the Philippines has “ballooned.”

The PNP-AKG classifies kidnapping-for-ransom cases under three categories: those perpetrated by organized crime groups and other individuals; casino-related, and; POGO-related.

In POGO-related kidnapping, victims who work in POGOs are accused of stealing money from the company and are brought to safe houses where they are beaten. The suspects will then ask for ransom from the family of the victim from China.

But even as the family sends the money as ransom, the suspects sometimes still do not release the victim from detention.

On the other hand, authorities said casino-related kidnappings involve loan sharks who abduct players who owe them a certain amount of cash, which their victims had used in casino games.

Lumactod said the PNP-AKG acts on such kidnapping cases when there are complaints from concerned persons or the police attaché of concerned countries.

Just recently, PNP chief Gen. Debold Sinas warned POGO firms against withholding information on kidnapping cases to police and handling such incidents on their own.

Lumactod said the police need reports or complaints against POGO-related kidnapping before they can act on such a crime.

When the VUA scheme was first implemented in 2017, the visas were effective for three months, but extendible to another three months, bringing the maximum stay of tourists to six months.

But in January this year, the Department of Justice (DOJ) said the VUA for Chinese tourists would be valid for only 30 days and would no longer be extendable.

Then-Justice Undersecretary and spokesperson Markk Perete had said that the move came following complaints that some were using the VUA scheme to obtain employment whether in POGOs or other kinds of jobs later on.

In the latter part of January, BI suspended the issuance of VUAs to Chinese “to slow down the influx of group tours” amid the COVID-19 pandemic.

Lumactod said this is also what the PNP-AKG wants concerning law enforcement.

(As far as AKG is concerned, we always say that the issuance of visa upon arrival should be suspended so that we can control the arrival of foreigners, especially Chinese, Taiwanese, and Malaysian nationals in our country.)

According to Lumactod, this will also control the arrival of foreign nationals who have cases in their own countries and want to come to the Philippines.

INQUIRER.net has sought comment from the DOJ and BI through its spokespersons regarding the issues raised by the PNP-AKG official.

“We need to put an end to visas upon arrival, all visas should be issued by consular offices after vetting. We must take extra care in outsourcing any part of the visa application process, picking only the most reputable worldwide,” he said in a tweet in July last year.

The issuance of a visa upon arrival likewise recently became a subject of a Senate investigation on the alleged “pastillas” racket within BI.

Senator Risa Hontiveros, chair of the Senate committee on women that was conducting the hearing, earlier said the “pastillas” scheme generated some P30 billion in kickbacks from 3.8 million Chinese arrivals that were allegedly shared among immigration officers, and P2 billion in bribes from Chinese tourists under the VUA racket.