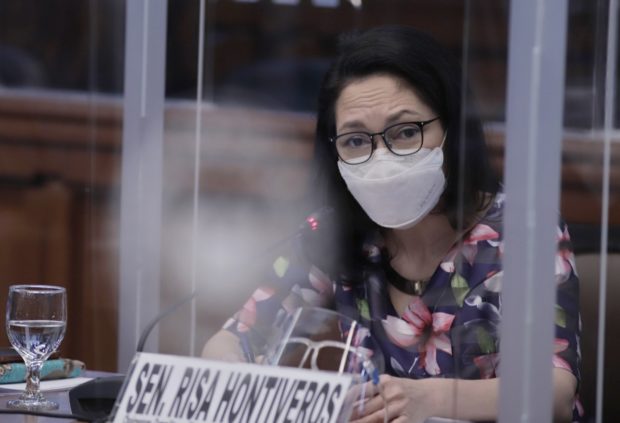 MANILA, Philippines — Corrupt immigration officers have pocketed some P40 billion in bribe money since 2017 by facilitating the entry of Chinese nationals or assisting the departure of trafficked people at the airport, Sen. Risa Hontiveros said in a Senate hearing on Tuesday.

Hontiveros said the so-called pastillas scheme generated some P30 billion in kickbacks from 3.8 million Chinese arrivals shared among officers at the Bureau of Immigration (BI) and P2 billion in bribes from Chinese tourists under the visa-upon-arrival (VUA) racket.

The rest was reportedly earned through payola for the hassle-free departure of trafficked people, she said.

“We will get to the bottom of this. This house of cards will fall. It is not a matter of if but when,” Hontiveros said at the seventh hearing of the Senate committee on women, children, family relations and gender equality on the money-making scams in the bureau.

The pastillas scheme—so-called because the bribe money is rolled in white wrapper like the milk candy—involved BI officers who allowed the smooth entry of Chinese nationals to the country in exchange for a P10,000 “service fee.” Many of the Chinese tourists intended to work for Philippine offshore gaming operators (Pogos).

“Our estimate is that the masterminds have pocketed P30 billion. That’s based on the arrival data of Chinese nationals who are non-VUA. As for VUA, another revenue stream, the kickbacks go straight into the pockets of some officials,” Hontiveros said.

Based on BI figures, some 4 million Chinese nationals have entered the country since 2017.

“The numbers are staggering,’’ Hontiveros said, pointing out that the figure was even higher than the entire population of Quezon City, the most populous city in Metro Manila with 3 million residents. (See related story on Page A5.)

Of the 4 million Chinese, some 3.8 million were non-VUA applicants, while around 150,000 were VUA applicants, according to the senator. About 3 million of the non-VUA applicants were believed to have paid the extra P10,000 “service fee’’ in the pastillas scam, based on the testimonies of whistleblowers Allison Chiong and Jeffrey Dale Ignacio.

“The cash enters the airport and is distributed among the IOs (immigration officers),” Hontiveros said.

As for questionable VUA transactions, the bribe allegedly goes “straight to the main office,” where the visas are approved, the senator said.

Chiong earlier identified Red Mariñas, who was chief of the bureau’s Ports Operations Division before he retired, and his subordinate, Erwin Ortañez, chief of the Travel Control and Enforcement Unit (TCEU), as the leaders of the racket.

He named those working under Ortañez as Glen Comia, Bien Guevarra and Danieve Binsol, who handled Terminals 1 to 3 of Ninoy Aquino International Airport and their deputies Billy Cadang, Anthony Lopez and Arlan Mendoza.

None of these officials were among the 19 recommended for prosecution by the National Bureau of Investigation to the Ombudsman, Chiong said. “They are the bosses. The bosses hold positions in TCEU because TCEU is the one in control. That is the backbone of the syndicate,” he told a Senate hearing on Sept. 22.

Red Mariñas, along with his father, Maynardo, who headed the Special Operations Communications Unit before his retirement, appeared at Tuesday’s hearing to deny his involvement in the scam.

He also denied having a contact in the Office of the Ombudsman as Chiong allegedly claimed in a meeting with Ignacio.

But in the same hearing, Chiong said Red Mariñas achieved notoriety at the airport because he allegedly used the proceeds of the pastillas racket to fund his 2019 campaign for mayor of Muntinlupa City. Mariñas ran under the National Unity Party and lost to reelectionist Jaime Fresnedi of the Liberal Party.

“The Mariñas family has profited greatly from this, but the question remains: Who are their protectors?” Hontiveros said.

Based on a copy of Red Mariñas’ statement of contributions and expenditures for his poll campaign obtained by the senator’s office, the former immigration official declared P1 million in expenses.

“One million pesos to run for mayor? That’s not even enough to run for barangay captain,’’ Hontiveros said.

The senator noted that the Mariñases were appointed heads of their respective divisions in July 2016 by then Justice Secretary Vitaliano Aguirre II.

In 2017, Aguirre issued Department Order No. 41, which allowed Chinese citizens to enter the Philippines without a visa issued by the Department of Foreign Affairs. Previous Senate hearings showed that VUAs were processed by travel agencies, many of which only required a mere screenshot of the applicant’s passport sent via the WeChat app.

“The person involved could have been trafficked by a syndicate, but as long as she or he had no derogatory record on paper, then that person would have been able to enter the country with a VUA,” Hontiveros said.

At the hearing, Aguirre, who quit his post in April 2018, confirmed that his order was “meant for Chinese nationals,” but he said he had no role in the implementation of the VUA policy.

“The best person to answer that is the commissioner of the Bureau of Immigration,” he said.

Hontiveros said the BI rackets practically rolled out the red carpet for the “online gambling industry and the cross-border trafficking of women.”

Such huge amounts of cash were enough for public officers who had just lost their overtime pay to “live the high life, drinking expensive alcohol in high-class nightclubs and vacationing abroad almost monthly,” Hontiveros said, noting that there was even money to finance a run for election.