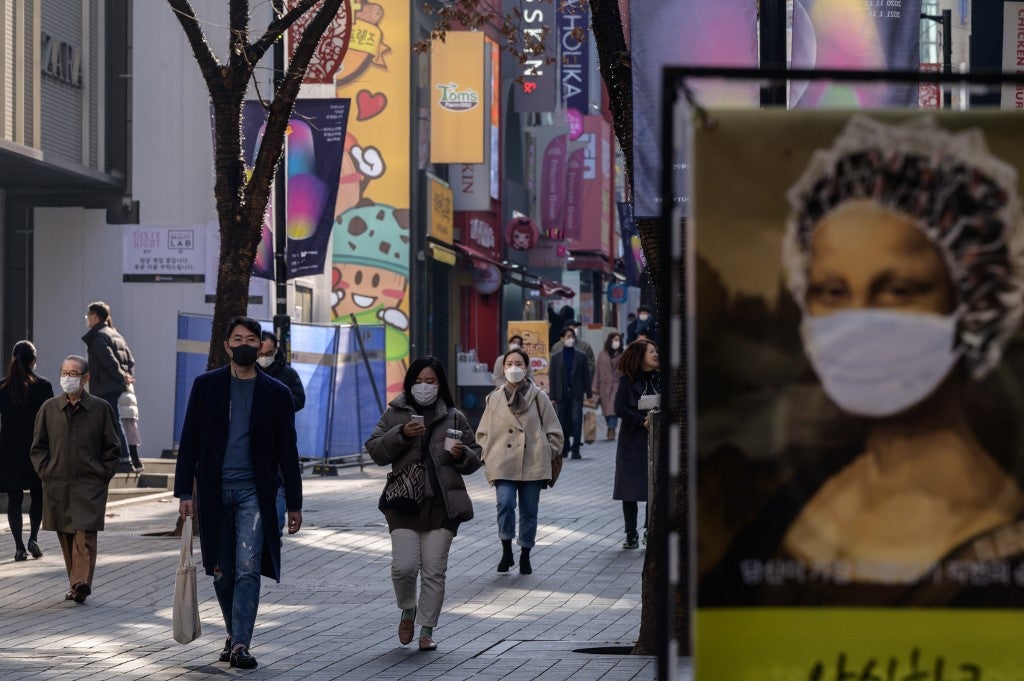 Shoppers wearing face masks walk through the Myeongdong shopping district of Seoul on November 26, 2020. – South Korea reported its highest daily number of coronavirus cases since March on November 26, with a surge of new infections sparking fears of a major third wave. (Photo by Ed JONES / AFP)

SEOUL —South Korea reported 583 new coronavirus cases on Thursday, the highest since March, as it grapples with a third wave of infections that appears to be worsening despite tough new social distancing measures.

The government reimposed strict distancing rules on Seoul and surrounding regions this week, only a month after they had been eased following a second wave of infections.

Some experts say the government moved too early to relax those rules, as the daily tally exceeds 500 for the first time since March 6, with young people at the center of the surge.

“The easing was done because of economic concerns and growing fatigue but it was premature and sowed the seeds of people’s complacency,” said Kim Woo-joo, a professor of infectious diseases at Korea University Guro Hospital in Seoul.

South Korea’s first wave erupted in late February from meetings of a religious sect but the latest cases are more dispersed around the capital, Seoul, making them harder to trace and contain.

Of the latest cases, 553 were locally transmitted and almost 73% of those were from the greater Seoul area, the highest ever for the region, according to the Korea Disease Control and Prevention Agency (KDCA).

The daily tally could hover between 400 and 600 until early December if people fail to stick to stricter distancing, said Lee Sang-won, a senior KDCA official.

The armed forces ordered a 10-day ban on leave after a series of outbreaks at military facilities. Other clusters have been traced to a sauna, a high school, an aerobic academy, churches, a children’s cafe and a get-together among friends.

“COVID-19 has arrived right beside you and your family,” Health Minister Park Neung-hoo told a televised meeting of health officials.

“The spread of infections among young generations is extraordinary.”

Infections among young people, many of whom show no symptoms, prompted the government to urge students to stop attending cram schools and private lessons ahead of college entrance exams on Dec. 3.

Education Minister Yoo Eun-hae pleaded with citizens to halt all unessential outside activity for at least a week so that some 490,000 students can take the exam safely.

“We’re fighting a full-fledged third wave,” the KDCA’s Lee told a briefing. “Sources of infections have been diversified, and more active, young people are at the center of the spread, which requires greater control efforts.”

Health officials did not respond directly to criticism that the government had been too quick to ease restrictions following the previous spike in infections in August.

They have expressed regret about the economic impact of the latest measures, coming just after Asia’s fourth-largest economy returned to growth in the third quarter.

Asked about some calls from experts for more curbs, Lee said time was needed for the rules to kick in but additional action would be taken “without hesitation” when necessary.

South Korean markets held their nerve as the central bank kept its policy rate steady and marginally raised its growth outlook for this year and next.

On verge of third wave, Seoul area walks back reopening