EXPLAINER: PITC's role in gov't projects and why is it now in the hot seat | Inquirer News
Close
menu
search

EXPLAINER: PITC’s role in gov’t projects and why is it now in the hot seat 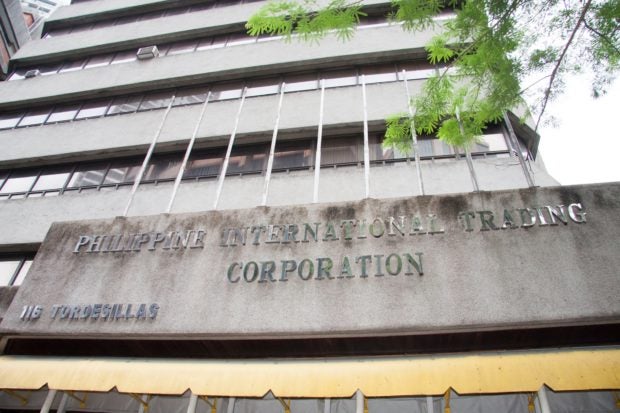 MANILA, Philippines — The Philippine International Trading Corp. (PITC), an attached agency of the Department of Trade and Industry (DTI), has recently held the spotlight as senators deliberated on the proposed 2021 national budget.

According to senators, some P33 billion worth of taxpayers’ money was “sleeping” in bank accounts of the state-run trading firm, which was supposed to procure goods for various government agencies. Lawmakers also questioned its competency to obtain COVID-19 vaccines for the country.

So, what exactly is PITC? Why was it established and suddenly, its track record put in doubt?

In 1977, Presidential Decree (PD) 1071 widened the agency’s scope of responsibility – making it in charge of the country’s trade transactions worldwide.

The agency also described itself as a “self-sustaining GOCC (Government-Owned and Controlled Corporation.”

“It does not rely on government appropriations for operational needs. It was established in the 70s when the government took the lead in trade negotiations for both imports and exports,” PITC President and CEO Dave Almarinez said in a November 24 statement.

“With trade liberalization in the 90s, there was a paradigm shift from the government as chief trade exponent to enabling and empowering the private sector to take the lead,” he added.

In terms of its International Trade Services, it handles the export trading, customs bonded warehousing, countertrade and imports trading, and procurement services.

Locally, it oversees and responds to the procurement needs of different government agencies. Some of their notable government-related clients include the Armed Forces of the Philippines (AFP), Philippine National Police (PNP), and Bureau of Fire Protection (BFP).

The 40-year-old company has always been under DTI. Currently, Trade Secretary Ramon Lopez serves as the chairman of PITC’s board of directors. The agency, however, is represented by Almarinez.

Aside from DTI, other executive departments like the Department of Agriculture(DA), Department of Environment and Natural Resources (DENR), and National Economic and Development Authority (NEDA) are included in the roster of the agency’s board of directors. 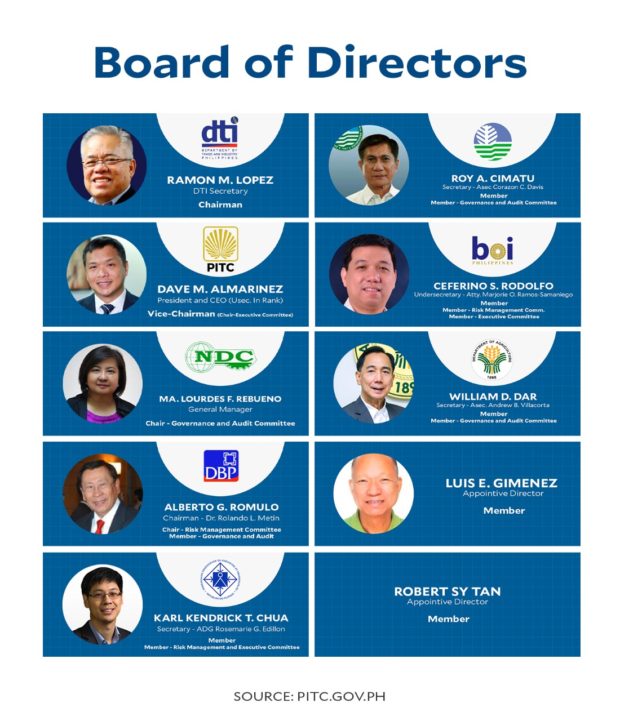 PITC’s Board of Directors. Data lifted from PITC’s official website

To understand PITC’s procurement process, INQUIRER.net asked Lopez to explain what happens when the agency handles a project.

According to him, the process starts by processing the Terms of Reference (TOR). PITC is tasked to communicate with the client-agency and identify what items are needed to be acquired.

Lopez clarified that the TOR is still done by DTI with the assistance of PITC while different panels of experts handle the technical specifications in procurements.

Under the reformed policy, PITC is also supposed to only accept funds once the bidding starts. This means that until the TOR is done, PITC should not receive any amount of money from agencies.

The firm will safely keep the transferred funds until they have a winning bidder, according to Lopez. An in case of failed transactions, the DTI chief said PITC can call off the project if it lasted two years without a winning bidder.

Other reasons to declare a failed transaction include the limited supply of items or when bidders cannot meet the specifications given by the agency-client, Lopez said.

Lopez also assured that all funds from canceled projects are returned to the national treasury.

Both Lopez and Almarinez have stated that there are no idle funds in PITC.

Lopez explained that funds currently in PITC are for ongoing projects of different government agencies. He also denied that the agency profits from the procurement process by refusing to return any unused or excess funds.

In a statement, Almarinez made clear that “[t]he PITC has also successfully procured a total of P786 million essential equipment for the Philippine Air Force while for the Bureau of Fire Protection, infrastructure projects amounting to P892.3 million are either on-going project implementation or already under various stages of active procurement.”

“We would like to reiterate that PITC is on track for the completion of the procurement projects and all funds are all accounted for. We appeal for reason and impartiality because it would be unfair to all if the COVID-19 vaccination program is already being pulled down even before it has a chance to rise above everyone’s expectations,” he said.

As the firm receives considerable amounts of public funds, lawmakers and state auditors naturally pore over its books related to the procurement of goods and projects for government agencies.

But deliberations on the P4.5 trillion national budget for 2021 led to the discovery that billions of pesos appear to be merely “parked” in PITC as it supposedly failed to fulfill its purchase agreements with its clients.

Since June, PITC has been called out for delivering only 10 percent of equipment procured by PNP since 2016, the P1 billion worth of undelivered equipment to PNP, being involved in BFP’s infrastructure project, and the P9.6 billion funds of AFP “sleeping” in its account, among others.

Senate Minority Leader Franklin Drilon on November 23 even disclosed that P18 billion in government funds are “parked” in the DTI firm. However, upon reviewing the audited financial statements, Drilon said there could be more – probably more than P33 billion.

Drilon likewise raised doubts on the PITC’s role in purchasing the COVID-19 vaccines, saying the agency’s poor performance can slow down the procurement of the serum that is seen to hopefully end the outbreak.

In the following privilege speech, the veteran lawmaker reiterated that more than 80 of PITC’s client-agencies are still waiting for its deliverables.

PITC was later ordered to submit its financial records to the Senate. A group had likewise asked the Senate to investigate PITC and urged for a review of the two Marcos-era edicts that allowed PITC to acquire items on behalf of government agencies.

As for Senator Panfilo Lacson, PITC’s function to procure items on behalf of government agencies should be “revisited and stopped.”

Lacson calls for need to look into ‘redundant’ PITC